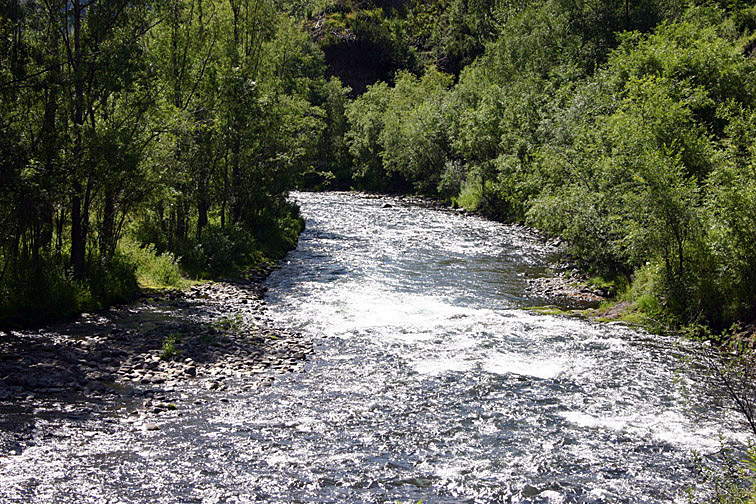 Kopylie River is a  long high-gradient stream, which is flowing through the valleys of the Central-Kamchatka Ridge, the spine of the peninsula. Kopylie is one of the sources of the Icha River, flowing to the west, into the Sea of Okhotsk. Icha is one of the major rivers of the western coast of Kamchatka. In the Icha there are 6 species of Pacific salmon, 2 species of charr, resident rainbow trout. Steelhead is also present in the drainage, but quite rare. 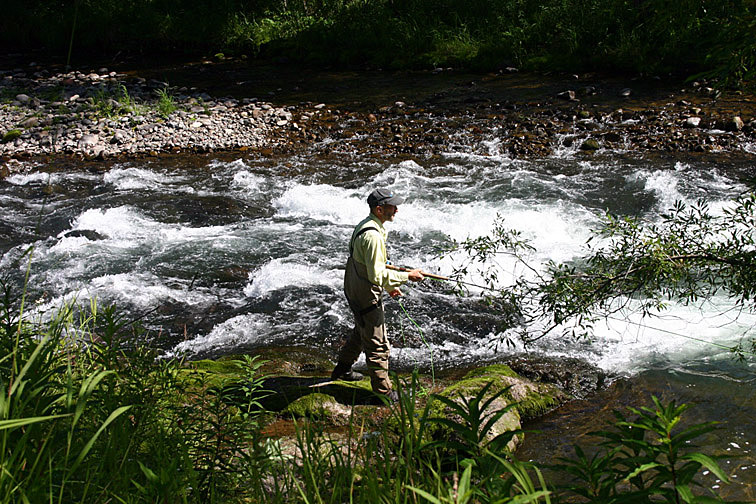 The fishing in such streams requires a search for the deeper areas with not as swift current: only in such places the anadromous fish running upstream could have a rest. 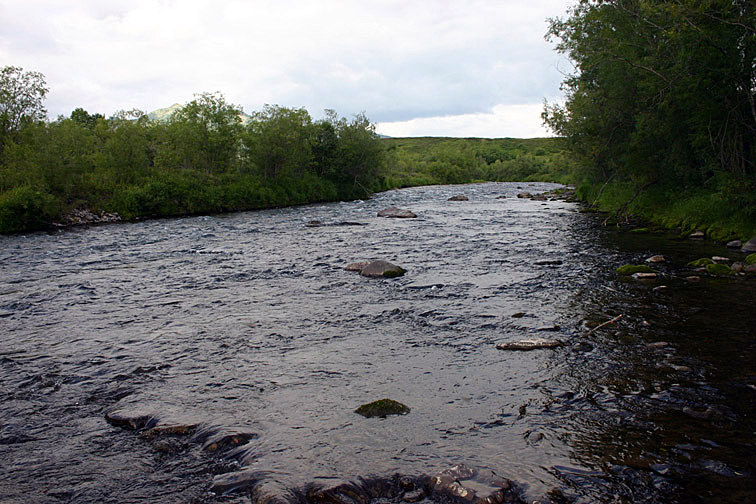 In some places the river is not as swift. Here is what you could call «a pool» of the Kopilie River, even though it is faster than the riffles on many rivers. The fish holding areas are beneath the boulders, close to the main stream. 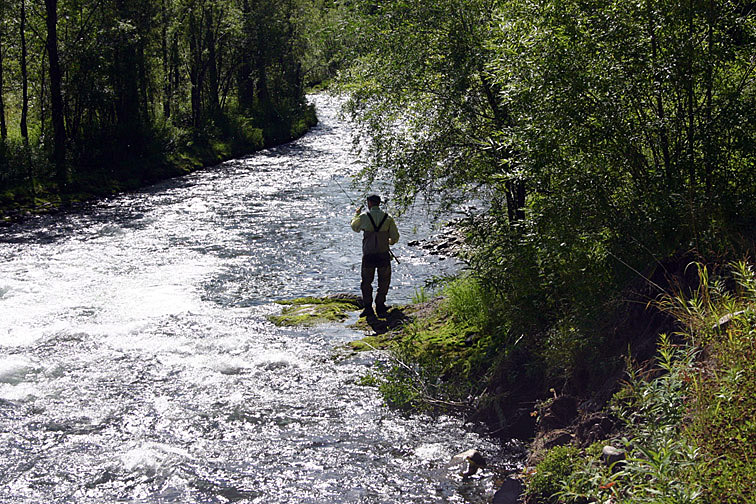 The easy part of the exercise on such swift a stream is that if you locate a suitable place, the fish (if there are any) will be right here. This is much easier than covering deep & uniform water of some marshy creeks. 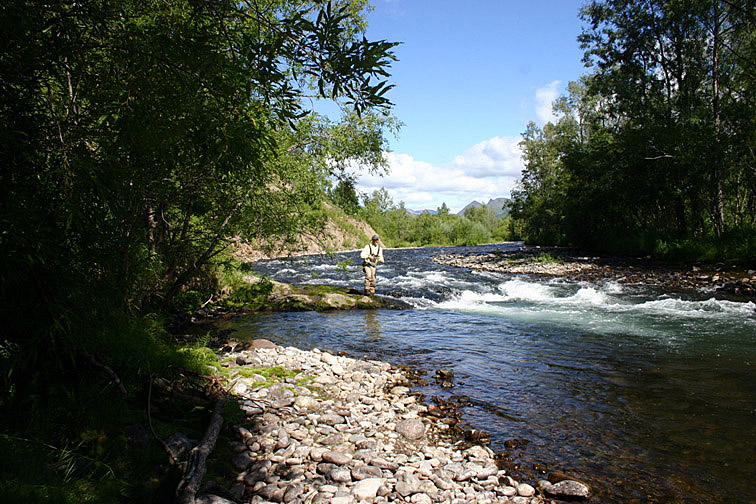 For testing the new salmon streams I normally use a small, pink «wobbler fly» on #8 or #10 hook. These ones are among the best for triggering a bite even from an anadromous, not-feeding fish. This time the «fly» is presented with a 11,5′ weight trout-spey rod and 16′ fast-sinking tippet. Normally I am trying to move this fly slow, close to the bottom. I could feel the vibrations or low-frequency buzzing coming up the line when it is wiggling its tail on retrieve, or when stops wiggling when touching the rocks. The feedback which you get from this fly is incredible — after fishing it a regular streamer feels completely dead. 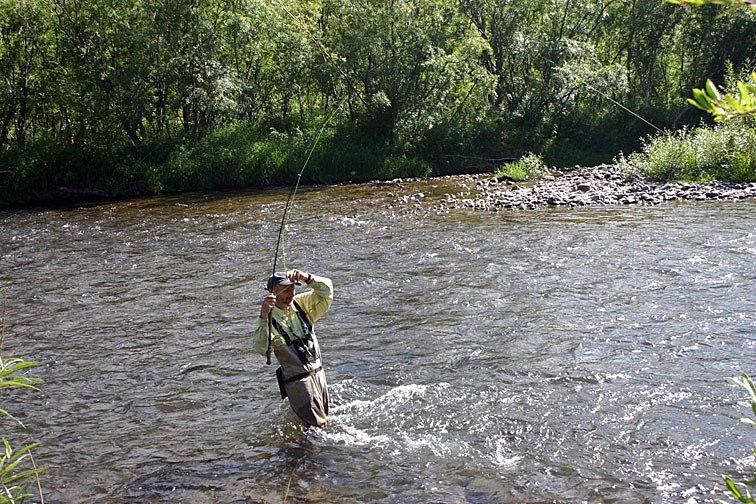 Fish on! A bite of the first fish, of «something» in the stream which you had never fished before is always exciting. 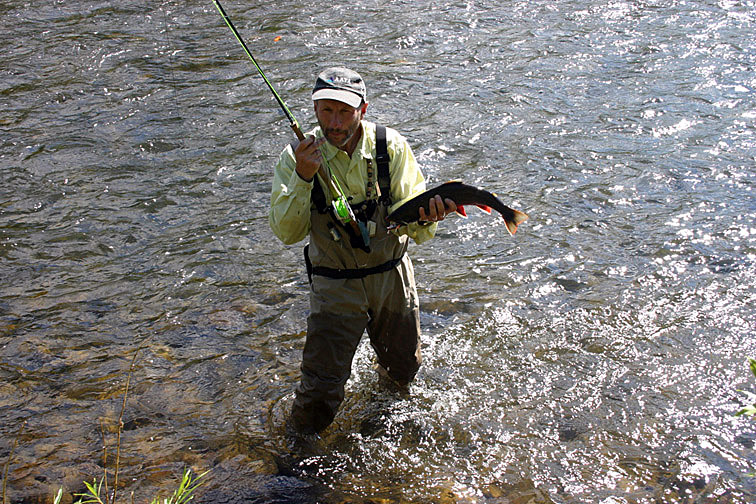 This is a sea-run Dolly Varden charr, a good size male. 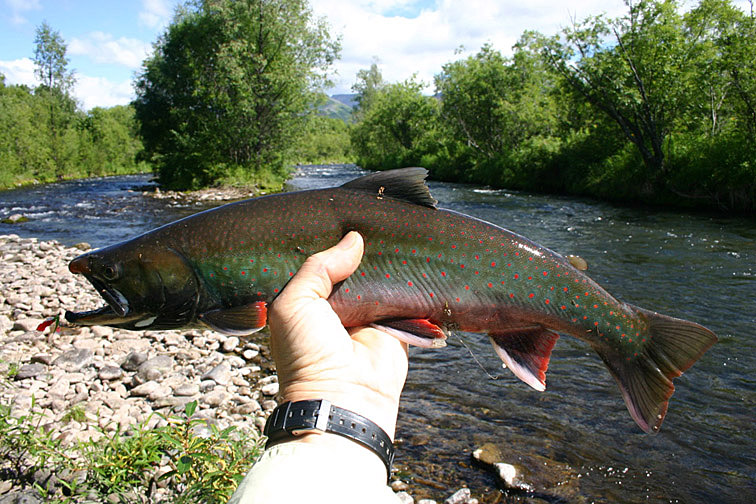 Spawning males of Dolly Varden char are among the most colorful Salmonid fish. The females are not as bright. 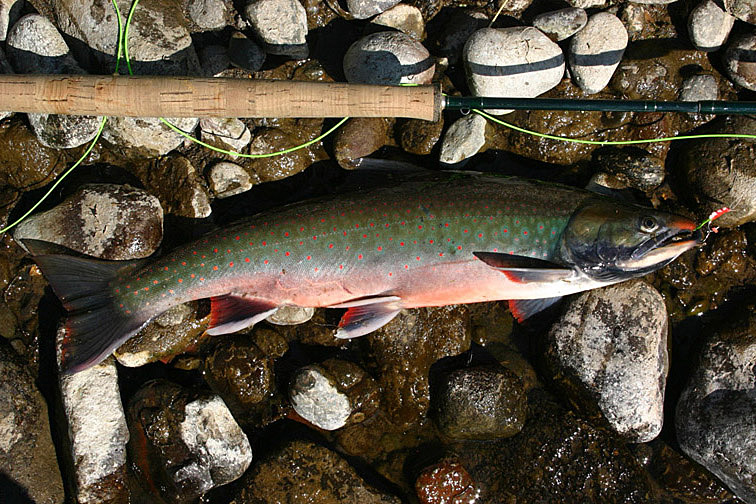 This fish had spent not less than 2 years in fresh water as a parr, and made at least 3 summer migrations into the sea for feeding. The prevalence of the males in the catches of the anadromous fish shows that the run is only beginning. The females will become more numerous later, in a week or two.