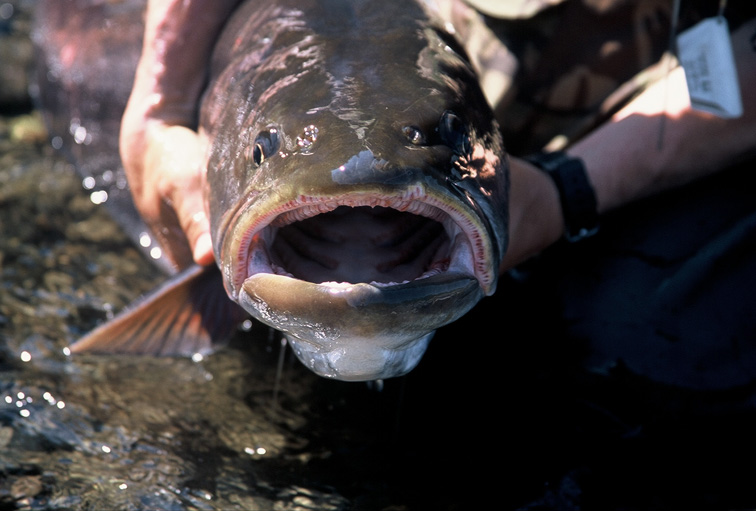 In the Far East of Russia, there are two taimen species - Siberian and Sakhalin (sea-run). This report is about the Siberian taimen inhabiting the basins of the Amur, Tugur, and Uda Rivers.

Significant part of the Far Eastern taimen is caught in the fall, in September and October. At this time, the level of the rivers drops; the water becomes colder and colder. Preparing for winter, predators begin to feed more actively and at the same time (if there are no heavy rains) they go out from the tributaries and oxbows into the main river. In general, the fish is becoming more active and more accessible at the same time. The period of the active fall feeding is well known to fishermen; many of us time the holidays to this season, and go in search of trophy fish. There are other periods of taimen activity; one of them is the beginning of summer. This time is not very popular among the anglers; there are reasons for this. The main one is the rather high probability of rain floods. Here are my own observations on the Tugur River (lower reaches of the Konin River). 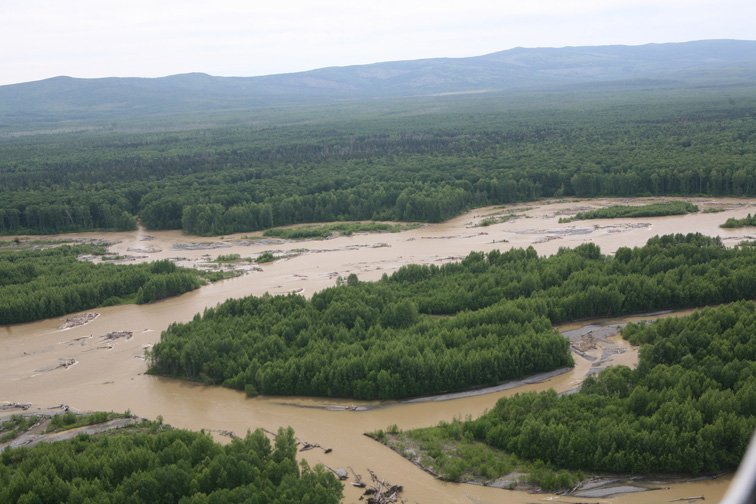 2016: a series of floods occurred in the second half of June; the high water level made it impossible to fish at all. The anglers have reached Komsomolsk and were forced to return home. 2017: In mid-June, the water was too high, and its level was gradually going down. By the end of the month, when we finished fishing and were about to go home, the level finally dropped to optimal. In these last days the biting was much better than in the middle of the month. In general, the fishing was a success: the four of us in 10 days have landed with flies about 60 taimen, among which there were large fish weighing more than 30 kilograms. 2018: in the early days on the river, the water level was quite low, and the fish were active. Four fly-fishers in two days were able to catch 45 taimen, among which there were a couple of trophy ones. By the evening of the second day it started to rain ... on the third day by lunchtime the river began to rise and became cloudy; the fishing trip had to be finished. This was the end of our planned two-week trip. 2019: Constant rains kept the level high enough to make fishing difficult. The water did not fall, but rose, and by the end of our stay on the river it became impossible to fish even in the oxbows. Despite this, the trip was generally a success; there were several trophy fish lndnd, one of which weighed 33 kilograms.

A few words about how our taimen live in early summer. In May, fish spawn, but before that they spent winter under the ice. Over the winter and spring, taimen lose weight significantly, losing about a quarter of their weight; a fish with a length of 140 cm in June weighs about 30 kilograms, and by the end of October - 35-38 kilograms. Accordingly, after the flood recession, the fish are hungry and actively feed. Far Eastern taimen from the rivers where chum salmon are reproducing consume the bulk of the annual diet in autumn, in August-October. Fish weighing more than 25-30 kilograms can catch and eat adult chum salmon; we have seen such a hunt many times. In the diet of smaller taimen, Pacific salmon also make up a substantial share: predators consume the bodies of the spent fish that have died after spawning. In addition, small and medium-sized taimen eat many resident fish (grayling, lenok), whose populations are largely dependent on nutrients coming from the sea. In any case, in June, all taimen, small and large, are hungry and actively feed.

An important point is the spawning of the minnows, which takes place around mid-June. In high water, the river minnows spawn in small flocks near the water's edge. Under suitable conditions (low, sun-warmed water), the minnows gather from large stretches of rivers to specific riffles, forming dense accumulations numbering literally millions of these tiny fish. Of course, predators are also concentrated near such places - hundreds of lenoks and dozens of taimen, including trophy ones. If you are lucky enough to find such a spot ... 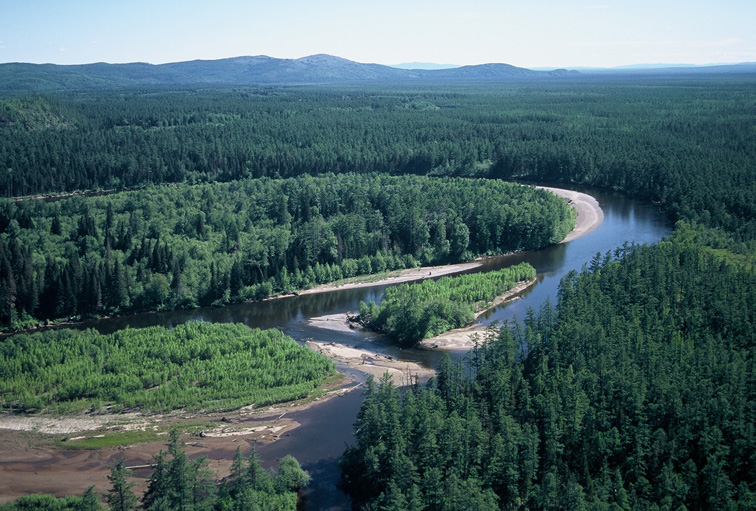 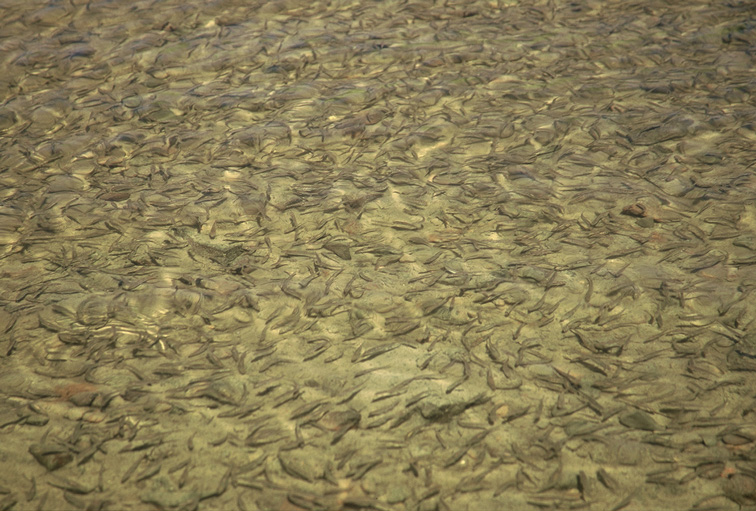 Spawning minnows In June, even a large taimen does not hesitate to take small prey. In addition to minnows, it can eat sculpins. The surface lures work well at this time. I have seen the large fish coming to the surface for small poppers and streamers less than 10 centimeters long presented with floating line. But in the fall, a standard taimen fly has a length of 20-30 centimeters! 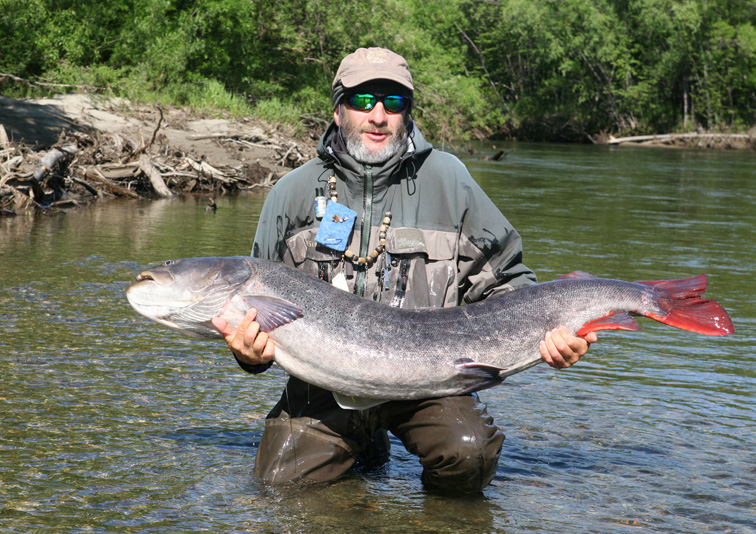 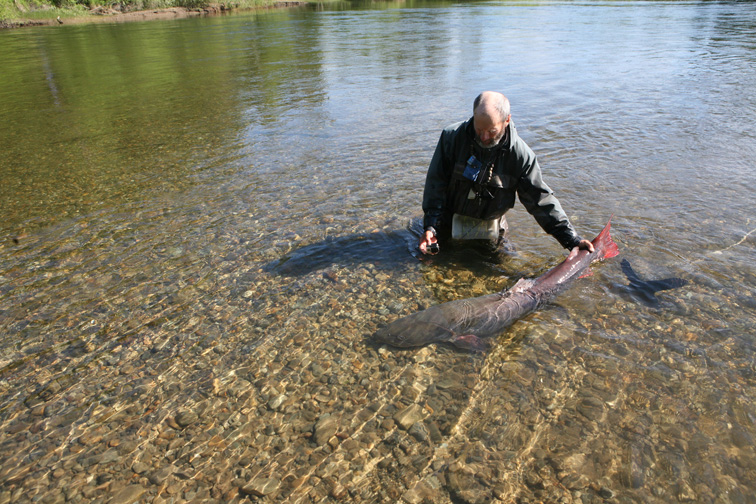 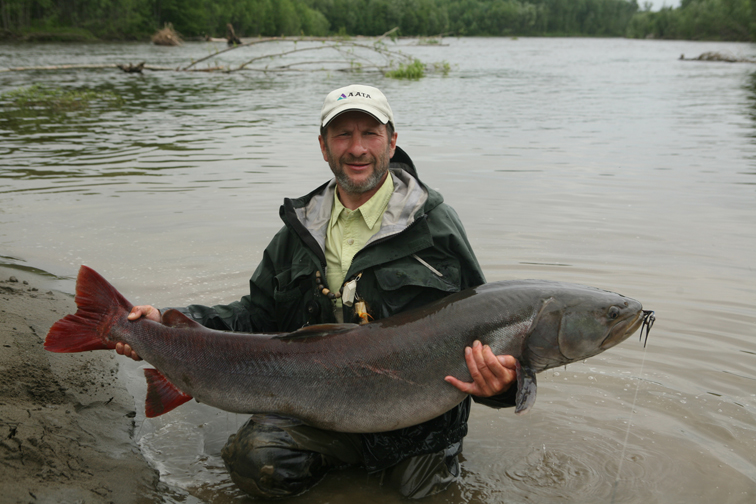 Summary: catching Far Eastern taimen in June doesn't just make sense; if you are lucky with the water level, you will have good chances encountering high fish activity. For fishing in early summer, it will be very useful to prepare small but strong flies and lures, as well as strengthen your nervous system. It is necessary to be prepared for the vagaries of the weather: a situation cannot be ruled out when the trip will be completely ruined by a rain flood. 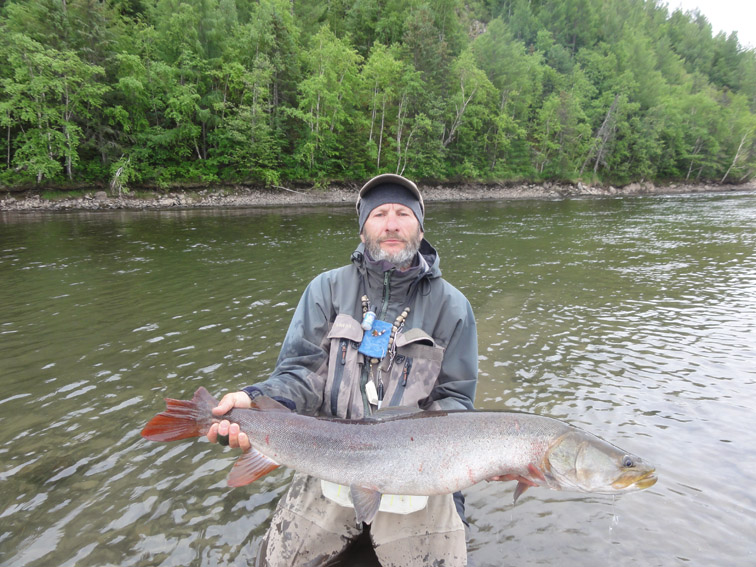 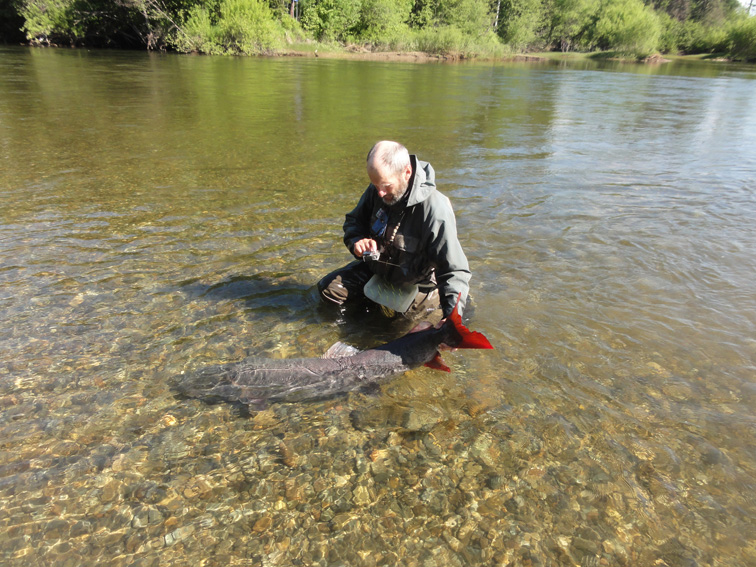 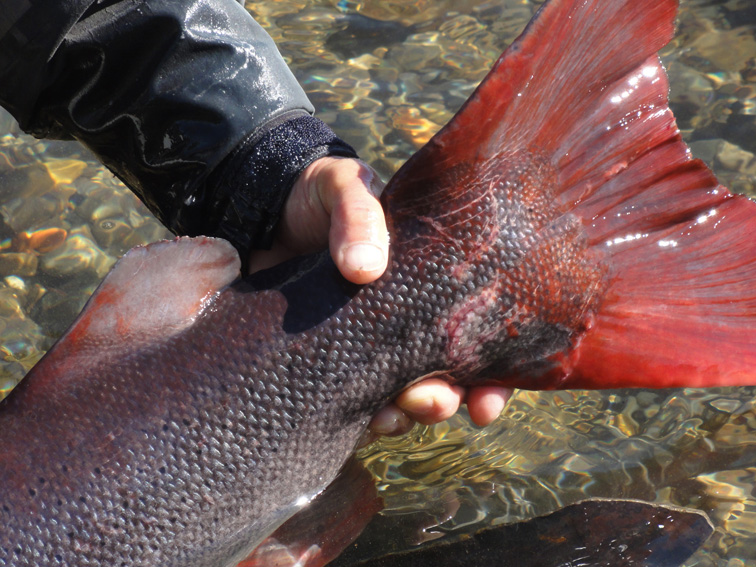 Another important point: at the beginning of summer, our taimen are especially attentive to the water surface. That is, in the summer, while they are still hungry, they are more opportunists than in the fall. At a high level of water in the river, taimen are often kept on a calm current - along the silted banks with thickets of willow. Such shores should be fished from a moving boat, casting a small popper or other medium-sized fly, and trying to put it at the very water edge. Of course, more often in such places the small taimen are feeding, but some have very, very decent size. 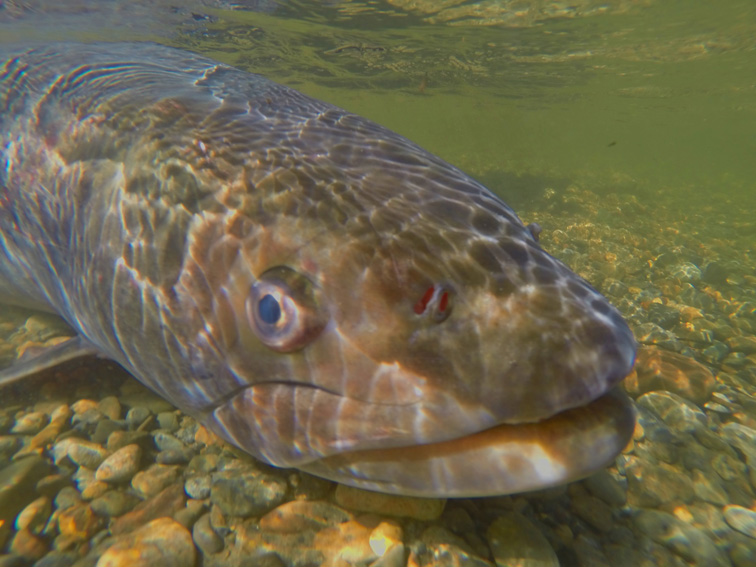 The higher the water level in the river, the more time we spend on fishing in bays and oxbows: in stagnant water, taimen often escapes the turbidity clogging the gills. Going into the oxbow on a boat, it is quite common to see good size fish that slowly move under the very surface. Do they bite in such places? Yes, of course, although not always. A taimen that has entered the slough may not react to a large fly, but can "suddenly" grab something small - the size of a minnow or a little bigger. 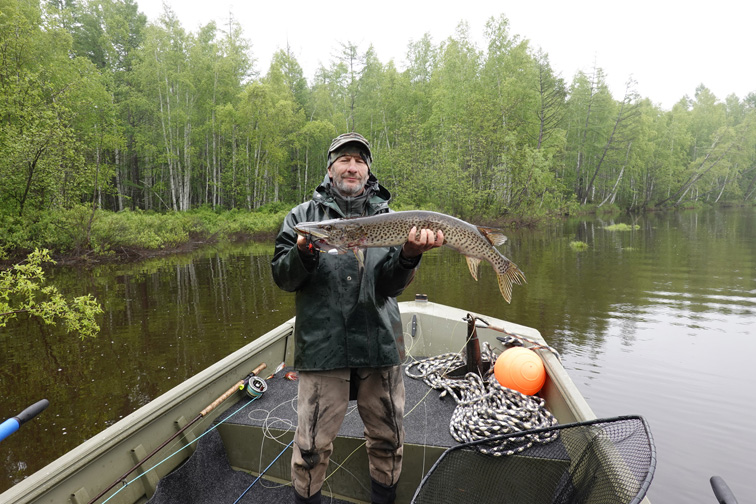 During floods taimen is often fought together with Amur pike 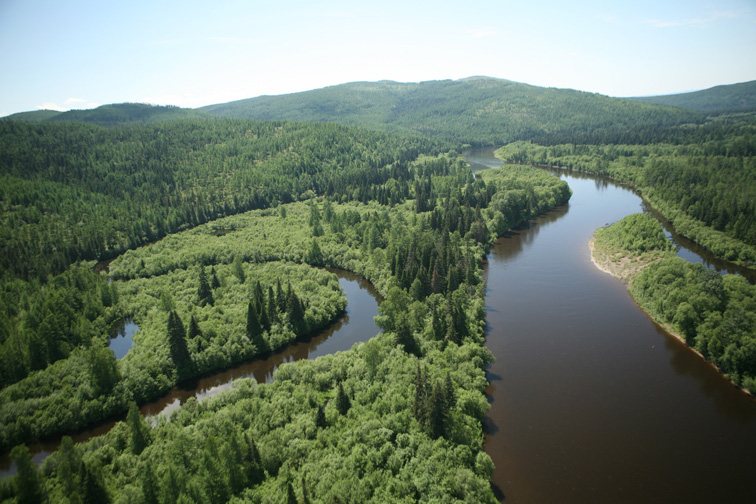