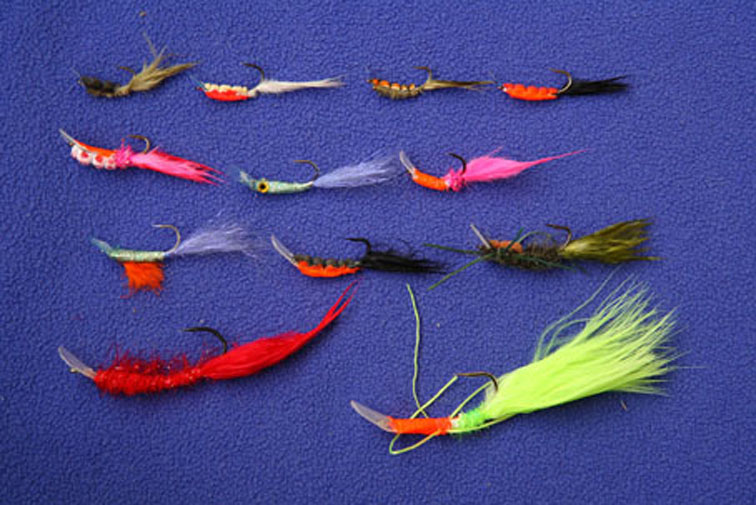 The Belly-Ups could be tied in any color or sizes

Typical «classic» wobbler-fly has foam back; its blade and hook in the water are looking down. Only recently I have got an idea to put some lead on the back of this fly, and to move its foam back to the belly. This simple action is inverting the balance of the fly — it is starting to swim on its back, with the blade and hook up. I am calling these new flies Belly-Ups. 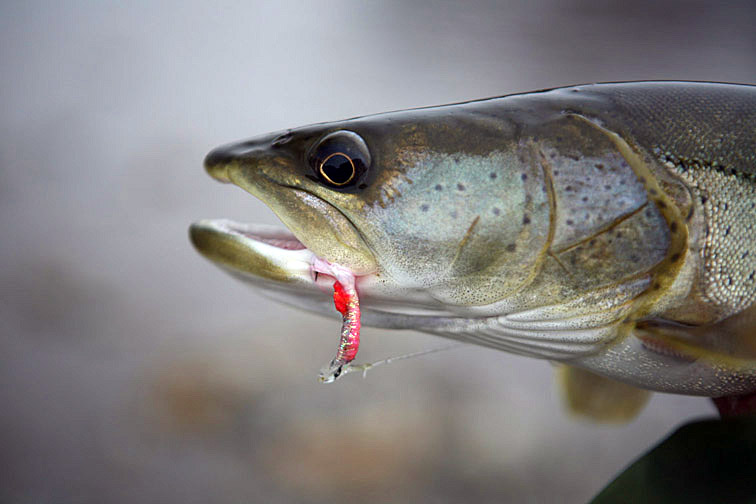 Siberian taimen same as other predators is often caught with the Belly-Up. Same as with other small flies for taimen, the best color is red. 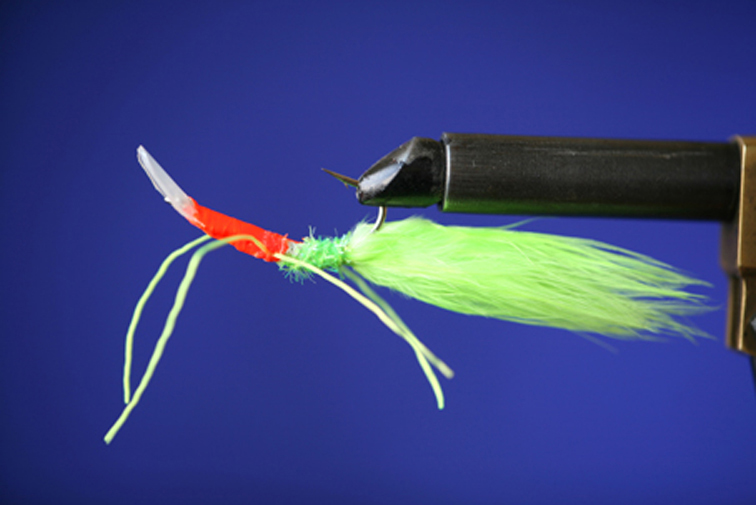 A 8-9 cm long, red or yellow Belly-Up with rubber legs I call Centipede. These Centipedes are used mostly for catching pike and catfish in weedy shallows and in the lakes.

The first testing had shown that new flies display very interesting wiggling action. On retrieve they move to the surface. Their behavior in the pauses between the jerks depends on buoyancy: they could float or sink. The hook of new flies is directed up and covered from snags by the body of the fly. 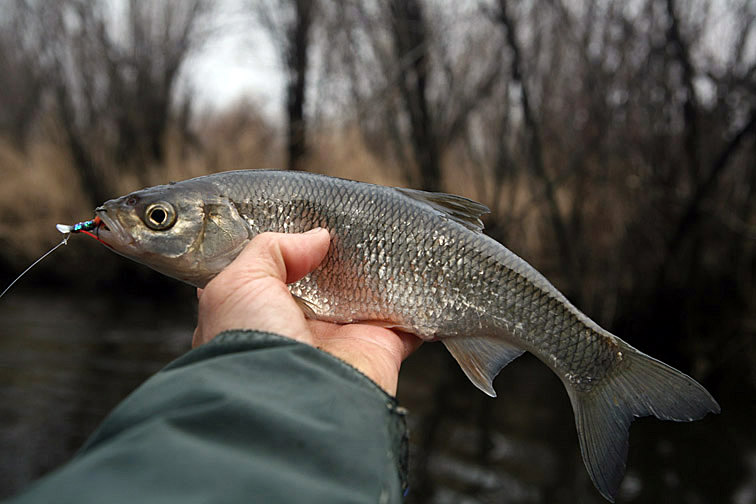 Amur ide is a predatory carp; it is biting a belly-Up well. At the same October day this fly was also working for lenok and grayling.

The first fly which came from my tying desk was prepared for pike: it had red articulate body and yellow legs. The creature was looking like something dangerous and poisonous. After seeing it my wife had stated: — It is not a fly, but a true centipede! I have decided to use this nickname for the pike variations of the new flies, and the general name for this new type of the wobbler-flies is Belly-Up. Later I have found out the big difference of the Belly-Ups from the regular «classic» wobbler-flies with the downright blade: the new flies do not require any foam back. The regular wobbler-flies with no foam back are not stable, but the Belly-Ups with no foam work very well. 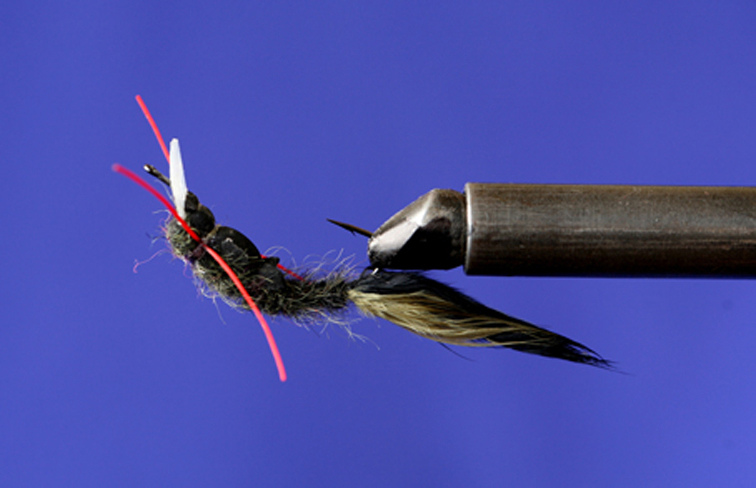 The black or red-and-black Belly-Ups work well for lenok. The fly at the image is a good imitation of a stonefly or an aquatic beetle.

The Internet search had given me the info that the idea of a lure with upright blade was already used by some innovative fishermen. In 1996 a Russian fishermen Igor Mikhailov had created tiny plug called Beetle for the use with light spinning-tackle. The ultra-light spinning lures of the Insecter series made by a Japanese firm Ivyline use clear upright blade as well. Belly-Up is a group of flies designed on the same principle as these lures; a result is a series of versatile and efficient flies. 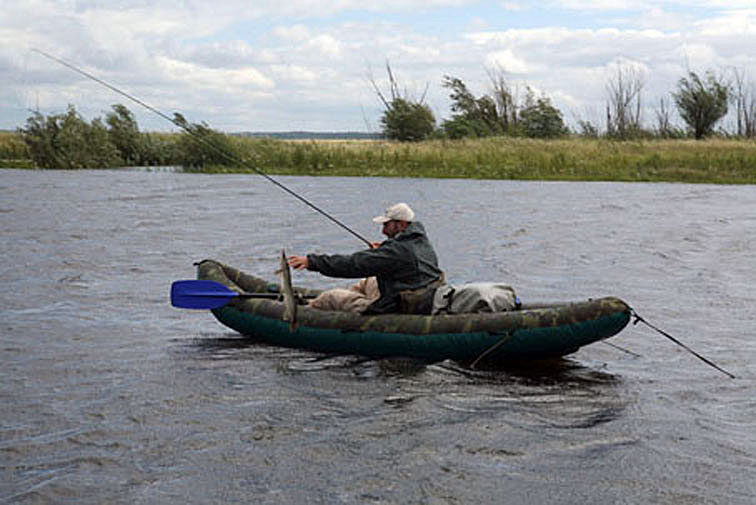 It is easier to catch a pike feeding in shallows from boat. The Belly-Up (Centipede) moves with the hook up near the surface. So, the weeds do not present too much a problem.

Same as other wobbler-flies, Belly-Ups are easy to make and difficult to fine-tune. I am always using mono line as tying thread. Here you can see a step-by-step description of a Centipede. Other types of the Belly-Ups are made the same way; the difference is only in the hooks and materials of the tail and body. 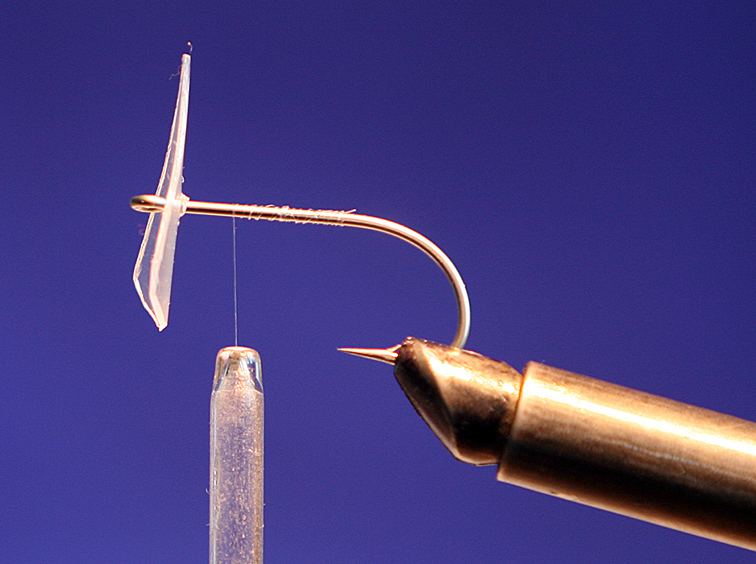 Cut a narrow triangle (about 20 degrees in the vertex) out of disposable syringe and pierce in the middle of it a hole for the hook. The length and width of the free part of the blade (the one on front of the hook eye) should be 1,5 times bigger than the body thickness of the future fly. 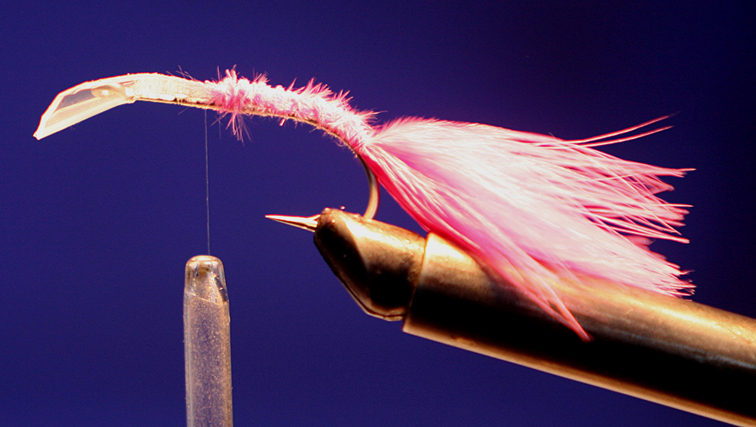 Insert the hook into the hole from the concave side of the blade. Tie its narrow part to the hook shank. Tie in the tail out of marabou and some Flashabou (optional). Other soft materials can be used as well. 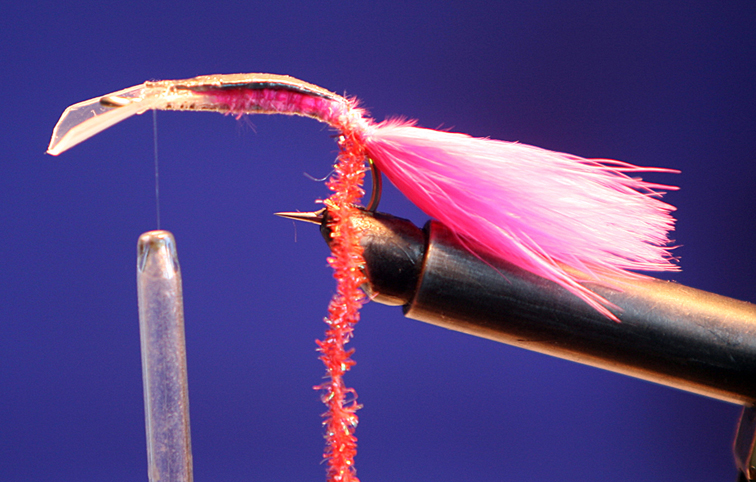 Top the back of the hook with a narrow, triangle piece of lead. Cut a free part of the blade with scissors, making its shape rounded. At this stage I am trying to leave the blade surface bigger than a ready fly of this size should have. Add some glue which sticks to the metal and plastic, and rotate the blade so its free part is directed perpendicularly the hook plane (important!). Let the glue dry. 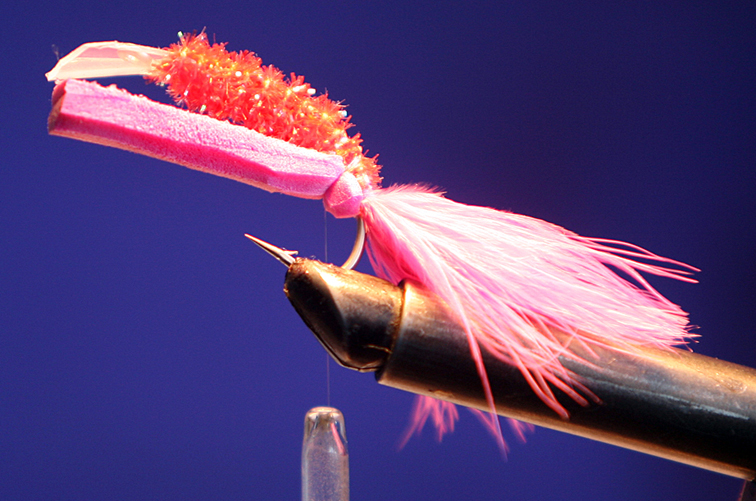 If you plan to make the fury body, wrap it with chenille or Dubbing Brush. Smooth body is covered with waterproof varnish on top of primer. Bright and fluorescent varnishes require white primer.

Instead of wrapping the body with chenille of other fibrous materials I often make the body smooth. For this I cover it with any waterproof paint. Before applying any bright paint use white primer. The pike flies, Centipedes, always have red, orange, or yellow body. Most of my Bellu-Ups are now made with no foam back. Instead of foam I put along the hook belly (which will be the back of the fly) a thread of synthetic chenille and wrap it with mono thread. This fastening is strong and totally invisible. One more option to make a body is to wrap it with Flashabou and then cover with clear lacquer. 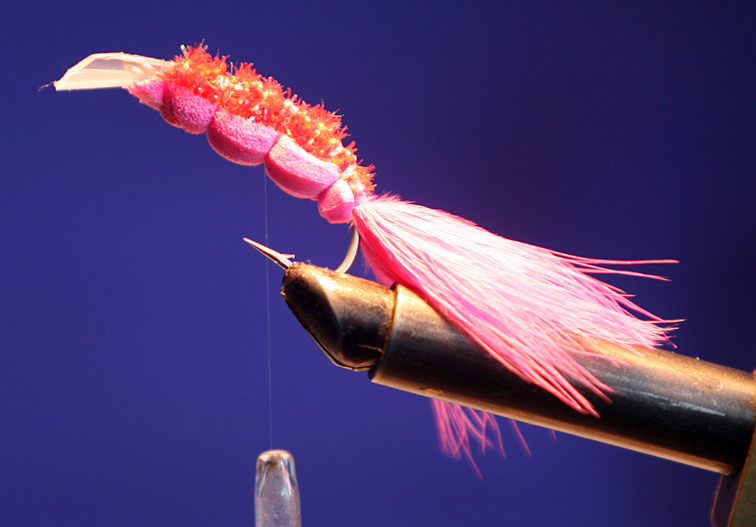 Put some glue on a foam strip and tie it to the hook belly in  places with several wraps of the mono line (optional). 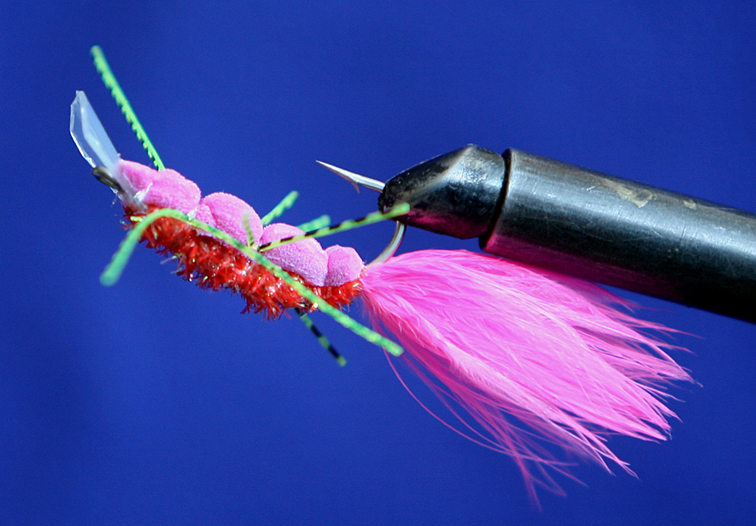 Tie in the rubber legs (optional). A Centipede is ready, but it is necessary to fine-tune the fly before you could fish.

The ready flies should be tested in the water. The tuning of a Belly-Up is more difficult then its tying. It consists of cutting the outer edges of the blade by tiny increments; the goal is to make the fly wiggle on retrieve without rotation. If the fly turns clockwise, cut the blade from the left side of the fly, and visa versa. If the fly tends to rotate too easily, decrease the size of the blade. Some of the Belly-Ups you tie are impossible to fine-tune properly; they have to be taken apart. A correctly tuned fly swims with the hook tip up and wiggles on retrieve or in the current.