Here I will show you some streamers which work well in our waters. We will start with the ones with common design — with a single downright hook. 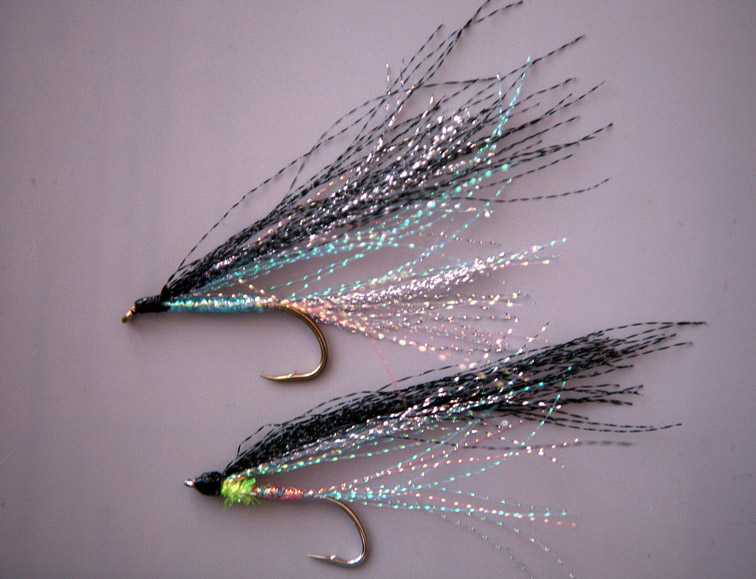 This variant of the Flash Fly is made out of black and pearl flashy materials. It is a good imitation of baitfish very attractive for all predators. We were also using it with success for catching the picky coho salmon of the Kamchatka Peninsula. Flash Fly is a very durable and easy-to-tie fly. 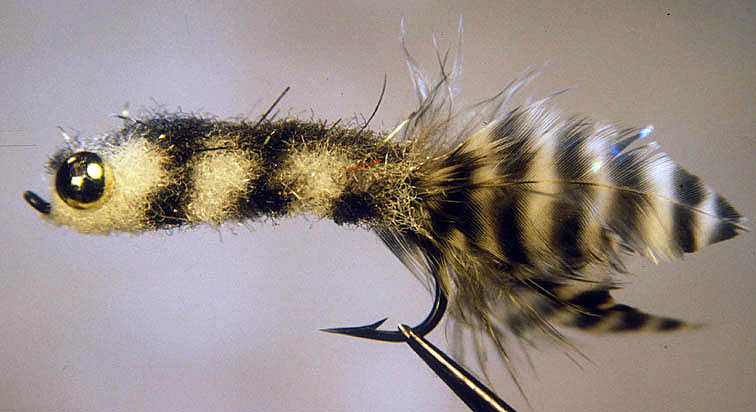 This one called Little Coho is a must in our salmon rivers. This simple fly is made out of the Plushille (Roman Moser) and some grizzly hen feathers and hand-painted with a permanent marker. It is an imitation of a salmon parr or a minnow, and resembles the majority of food available in the coastal rivers most part of the year. Many predatory species are caught with this fly. It is one of the patterns which I cast the first into a new water.

Egg Sucking Leech with a back out of a strip of a rabbit fur is necessary for the Pacific salmon fishing. The depicted colors and also a purple fly with a pink «egg» work great for coho and chum. Weighing with big lead eyes makes it possible to use it for a jig presentation — moving it up and down near the bottom. Besides salmon this fly is catching also the feeding predators, such as pike, taimen, and lenok. 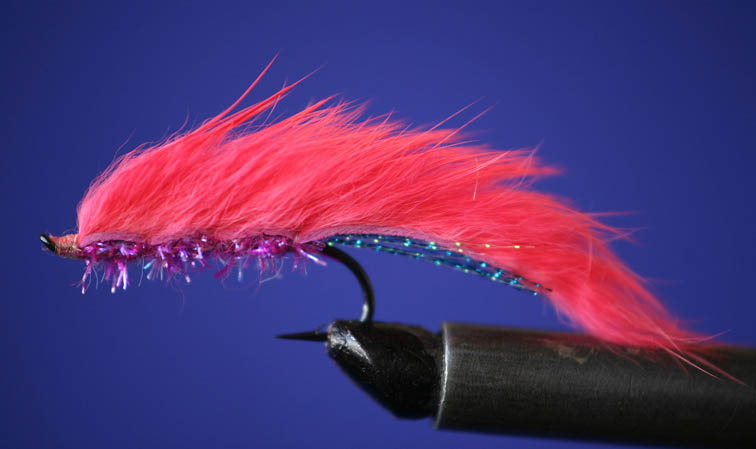 Bright crimson Zonker is a good choice for any salmon river. It was working well for cherry, chum, and coho salmon, same as for rainbow trout and char. 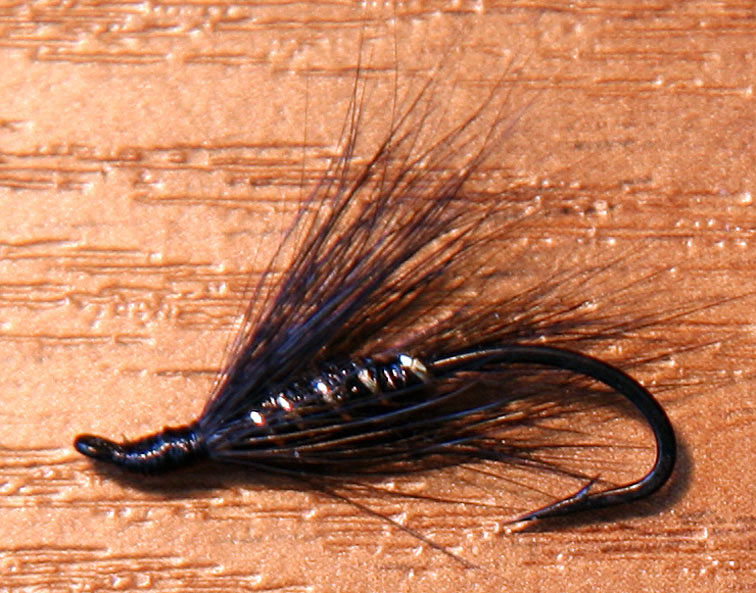 A simple fly called Black Eger is one of the best flies for catching cherry salmon in the Sakhalin Island. Most often it is tied on #10 hooks. For this fish it is presented on a slow swing, with sinking leader, near the bottom or higher. The local fishermen use it a lot with a spinning rod and a bombarda. 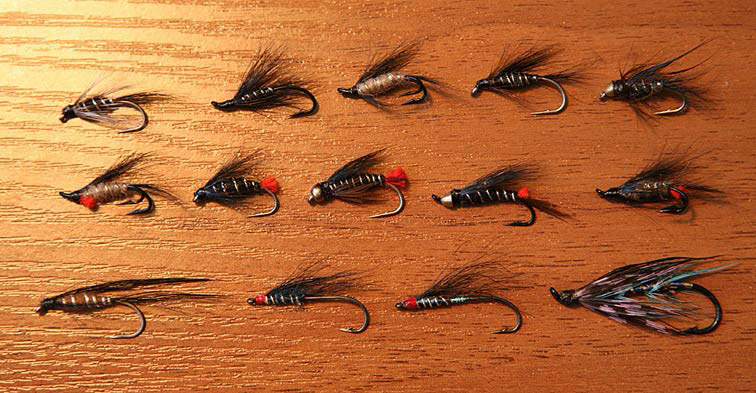 Examples of the flies good for the cherry salmon in the Sakhalin Island. In the low water the flies for this salmon are often more effective than any spinning lures. 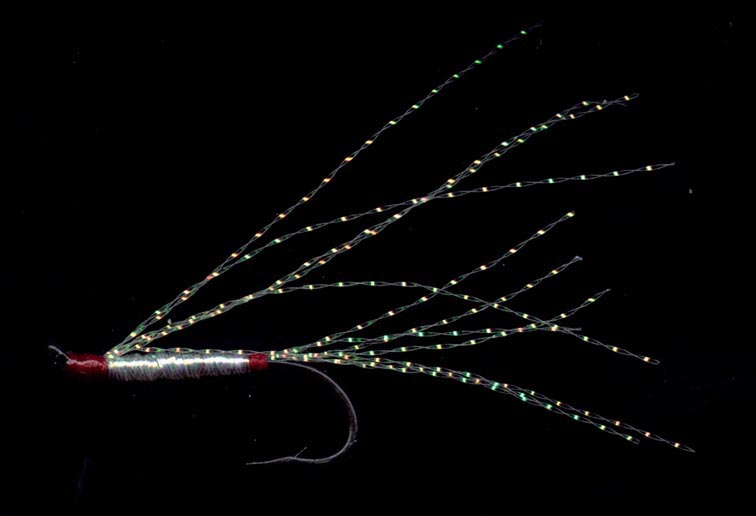 A very simple Smolt made out of Pearl Crystal Flash is an imitation of pink or chum salmon smolts. When these silver fish migrate downstream, all local predators shift to this easy-to-catch food. The same flies were catching the cherry salmon as well — in time when the smolts were present in the stream. 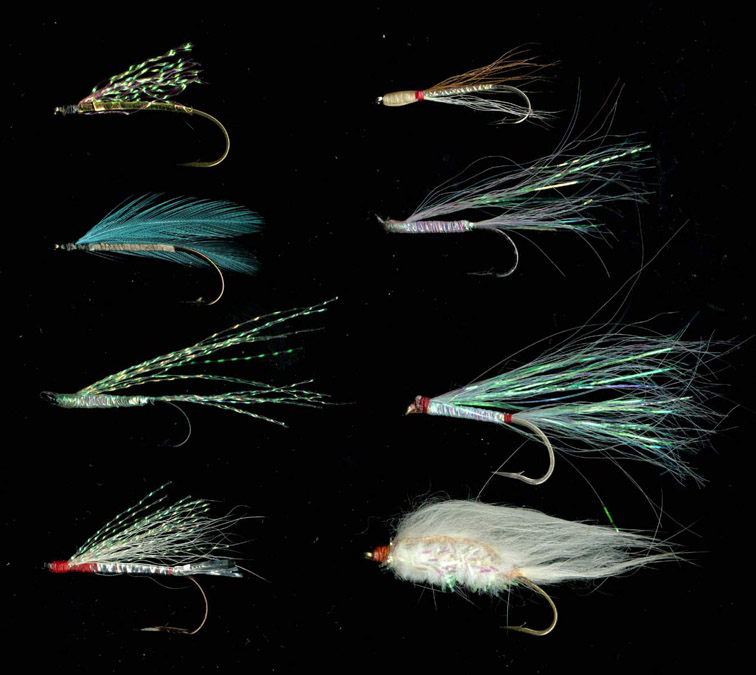 There are many variants of a smolt imitation. The bushy ones you will need during a flood, in murky water. 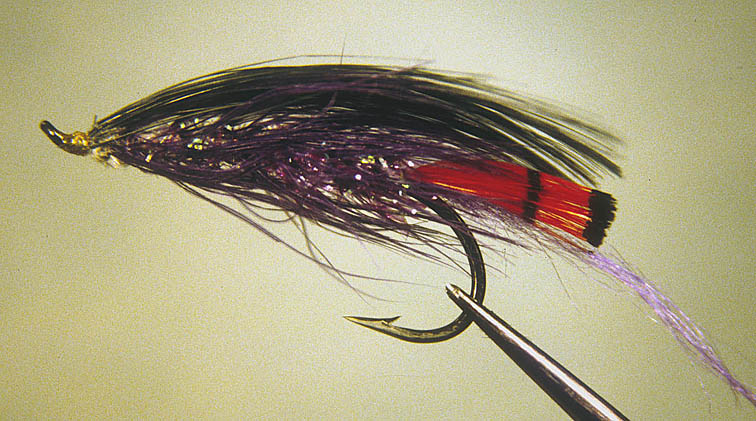 GP (General Practitioner) is an imitation of prawn. The fly is effective for the Atlantic and Pacific salmon, Kamchatka steelhead, chum, coho, and cherry salmon. 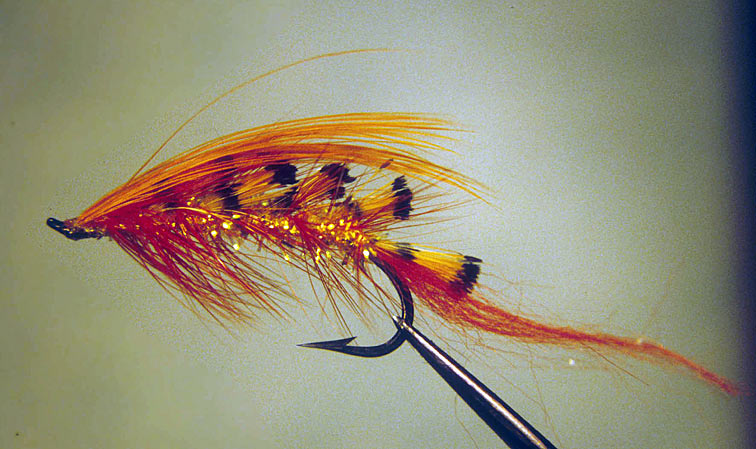 This is a different variant of the GP (General Practitioner) with striped back made out of golden pheasant neck feathers. 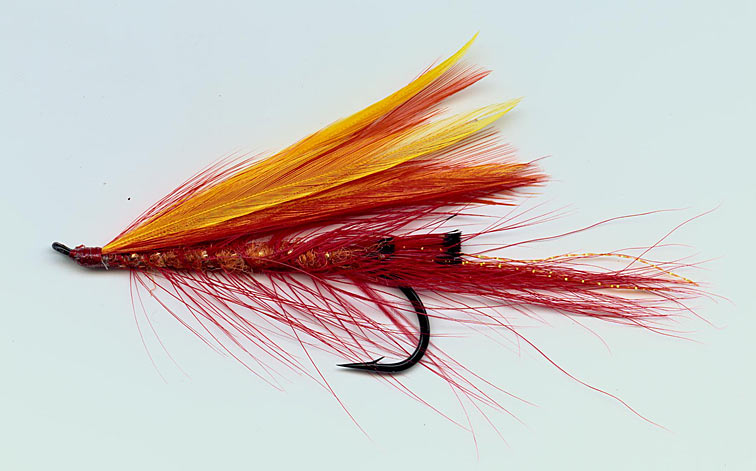 One more GP fly in red-orange-yellow colors is a good choice for Kamchatka steelhead.