I did not plan this expedition. The long-awaited trip to the north of Kamchatka was unexpectedly canceled, and I was left with “non-refundable” airline tickets on hand. I’ve decided not to cancel the long-awaited meeting with the Peninsula; the route for the trip should somehow come up by itself. So it turned out. I was remembering the Pravaya Kamchatka River, which the road to Ust-Kamchatsk is crossing to the north from a low pass from the Bystraya River to the Kamchatka River. I drove past it many times on my way to Esso. What about floating the headwaters of the Kamchatka River - to Milkovo town or a little further down? Kamchatka River: length 758 km, catchment area - 55900 square km. The wide valley of the river runs along a large part of the Kamchatka Peninsula. This valley is separated from the Sea of ​​Okhotsk by the Central Kamchatka Range, and from the Pacific Ocean - by mountains of the active, volcanic part of the peninsula. For this reason, the climate of the Central Kamchatka Depression is different from most of the peninsula. There is much more warm and sunny days here. No wonder that in the central part of Kamchatka there is the so-called "coniferous island" out of larch and spruce forests. Almost everywhere in Kamchatka the forest consists out of stone birch. I have decided to go by the inflatable kayak Timan made by Drakar. This double-layered kayak with a length of just over three meters can carry 120 kilograms of cargo; it easily accommodates one not too well-fed rower and two dry bags. In general, on such a boat it is quite comfortable to paddle alone with equipment that is more than enough for fishing and relaxation. Speaking on the equipment I need to mention a good size ax - not a tourist hatchet. This ax has rescued me more than once or not twice. in some places in the upper reaches of the river I had to literally cut myself through the lot jams. Cutting a tree of medium size is much easier and faster than unloading a boat and making portage through the forest. Another important thing is a lightweight tarp measuring 3 x 4 meters. It rained almost daily Usually, when I stopped for the night, I immediately set up this awning and under it - a single-person tent. The space left under the awning is enough to sort out things, cook food on a gas stove and generally have at least some kind of roof over your head. The total weight of my equipment with the boat and the products was about 60 kilograms - a 10-kg boat and two dry bags. The Kamchatka river is interesting and very diverse. At a short distance (a hundred of kilometers) it is changing dramatically several times. Its sources, the rivers Pravaya and the twice larger Ozernaya Kamchatka, flow mainly in one channel. These are shallow, bouldered streams with a large gradient. The flow rate due to the high roughness of the bottom is not too high - on the pebble sections of the river with the same slope the water rushes much faster. 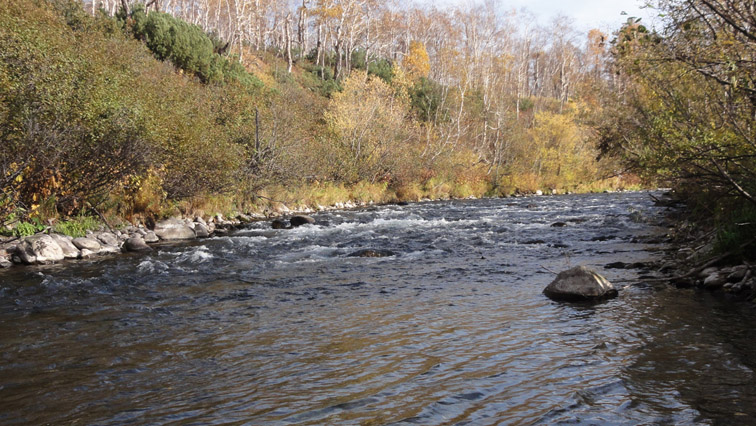 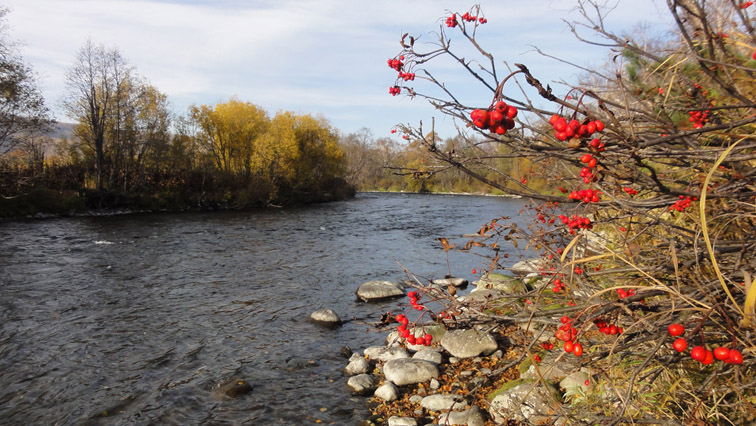 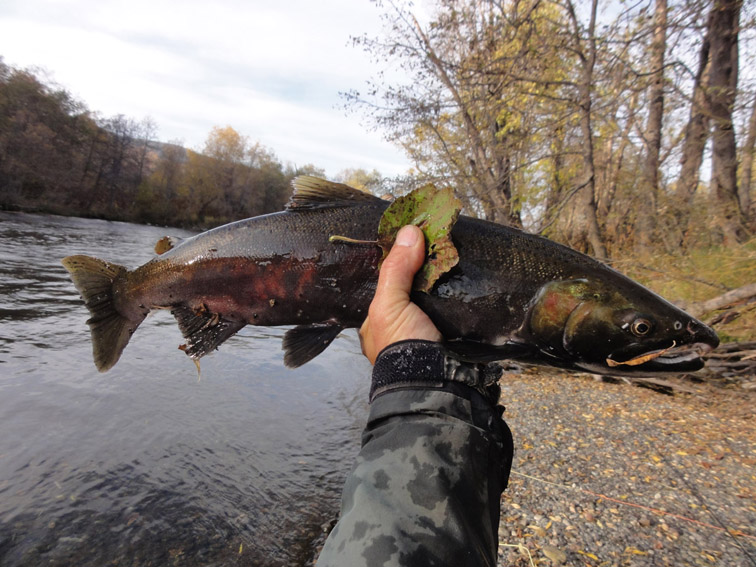 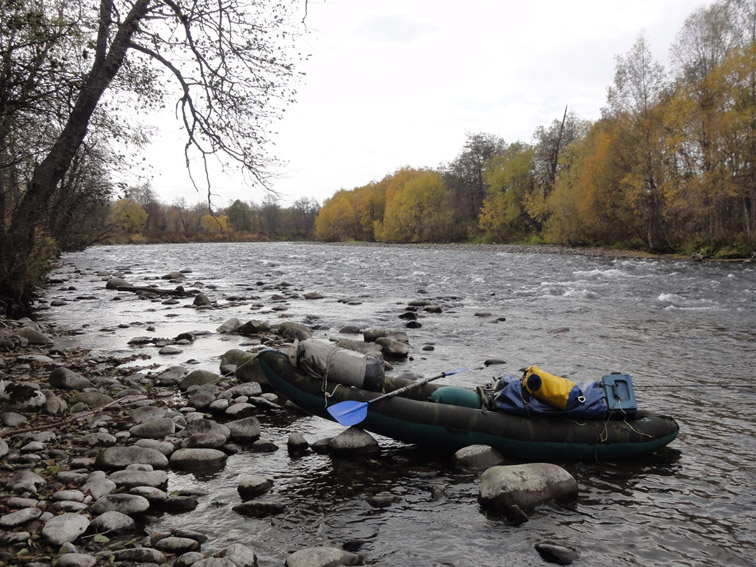 About five kilometers below the confluence of its main sources, the bed of the Kamchatka river, littered with boulders, changes into a river with a wider floodplain with numerous channels and pebble islands. For fifty kilometers there are many log jams. This area is quite difficult to pass and in many places it is simply dangerous. Particularly risky is the passage of the fast and powerful forest channels, which are blocked by many fallen trees. Most of the jams are in the area of the village of Pushchino and down from it, to the confluence with the Greshnaya River. 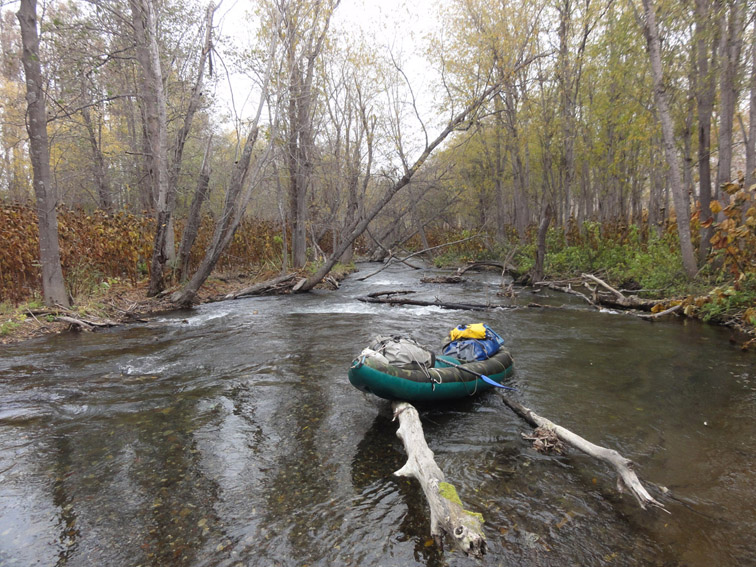 This forest channel is promising some tough going 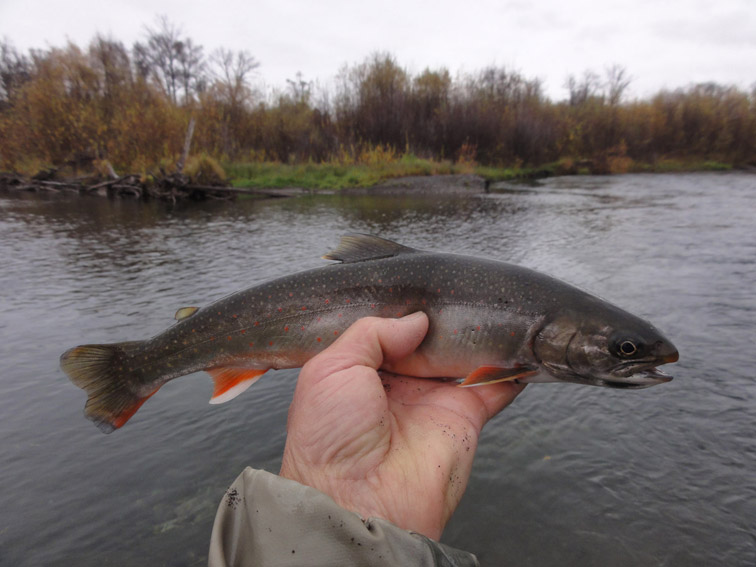 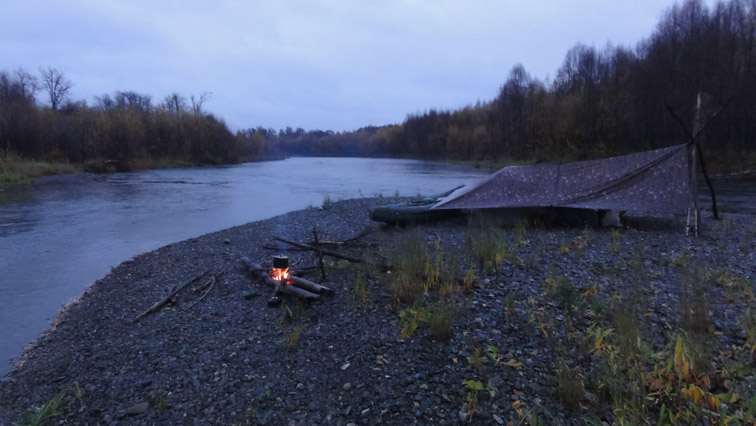 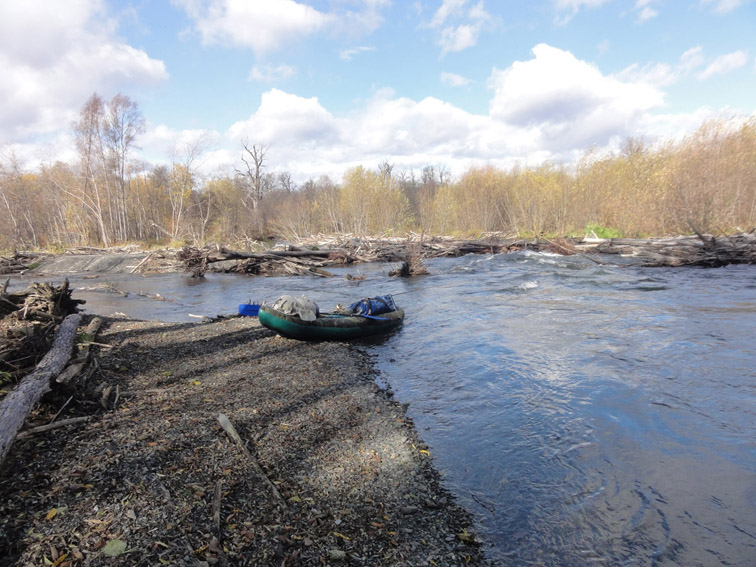 More jams in front go me 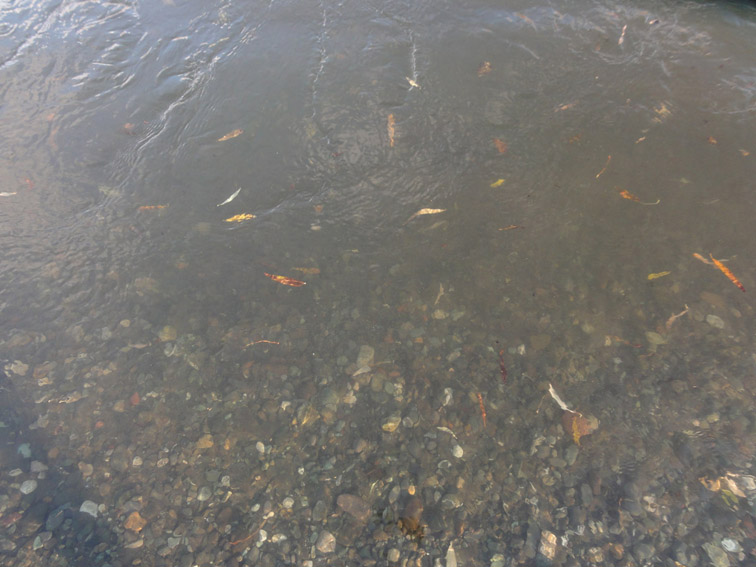 The leaves in the water makes the fishing hard 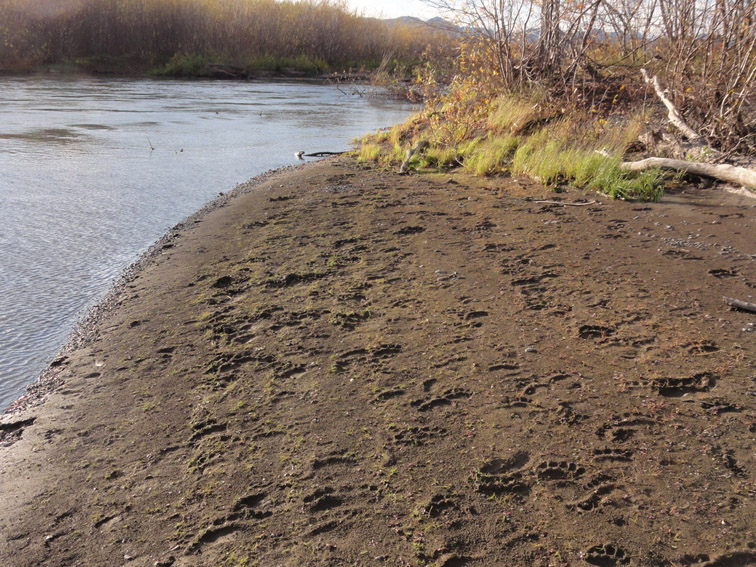 At 10-15 kilometers below the village Sharomy the river changes again its character. Its current slows down a lot, there are stretches with sandy bottom. The braids and riffles are covered with fine pebbles and coarse sand. In many places, both banks of the river are low, but steep. In this area, the river is connected with numerous quiet channels and sloughs; its current is relatively slow, and riffles are infrequent. 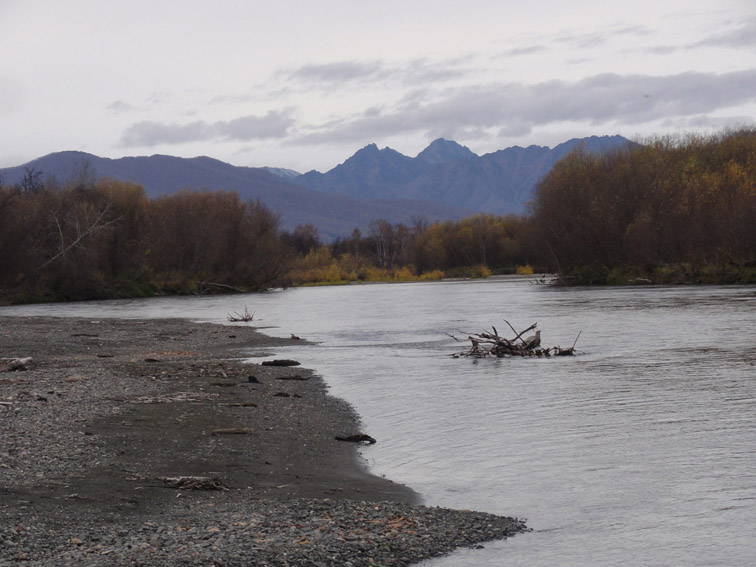 The river below the Sharomy village 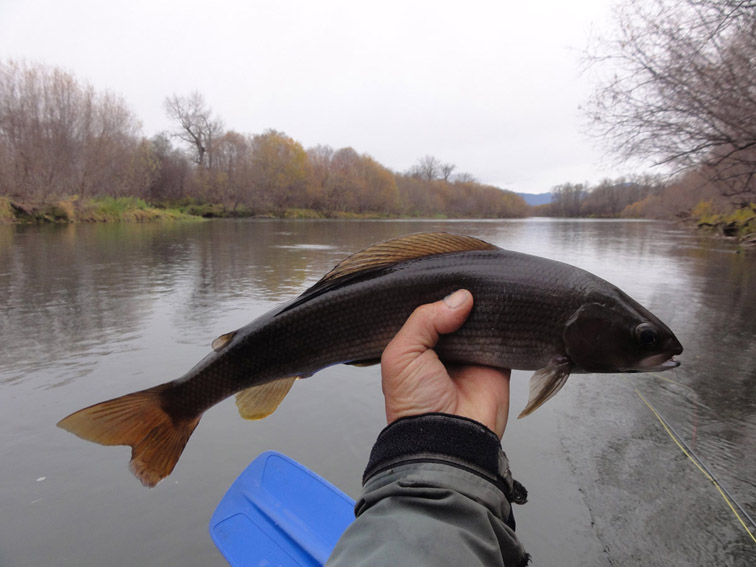 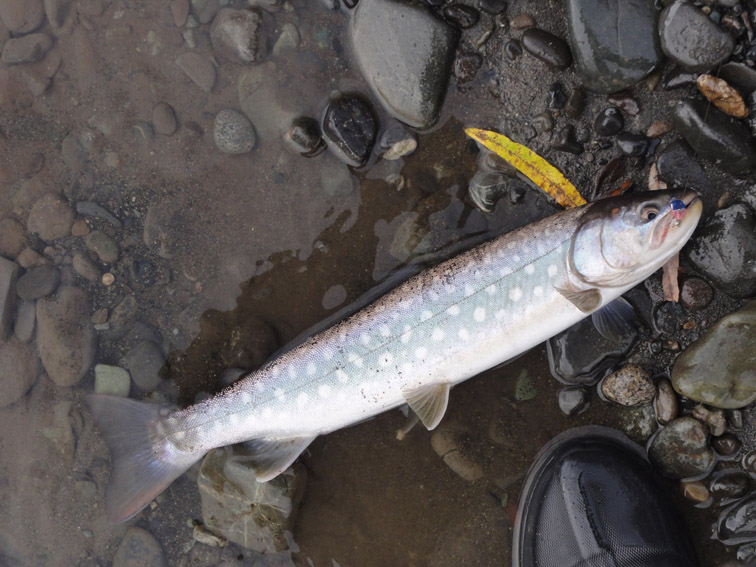 Below the village Milkovo the speed of the river gradually increases. Again, there are fast riffles and spits with large pebbles and even with boulders. The current is quite swift, and the river bottom is composed of pebbles. In this area, the river periodically approaches the right (eastern) edge of the valley and washes away high, crumbling precipices. There are also a lot of the sloughs here, which have already been inhabited by a crucian carp that has come from the lower reaches of the river. At this part in the river, even in low water some turbidity is noticeable due to eroding volcanic ashes. The width of the river in this area is from 50 to 120 meters. 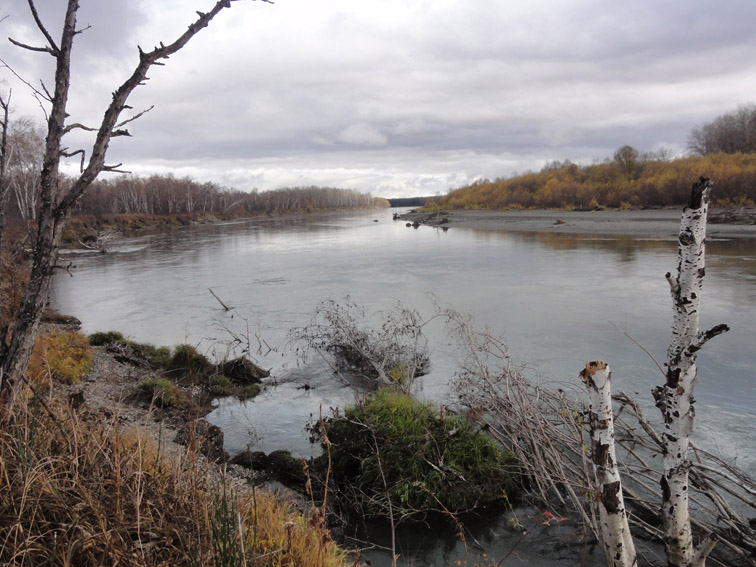 Below the Milkovo village the Kamchatka is a big river 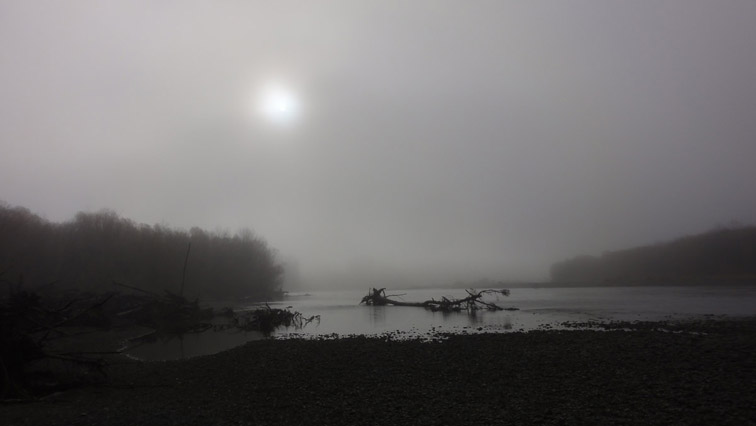 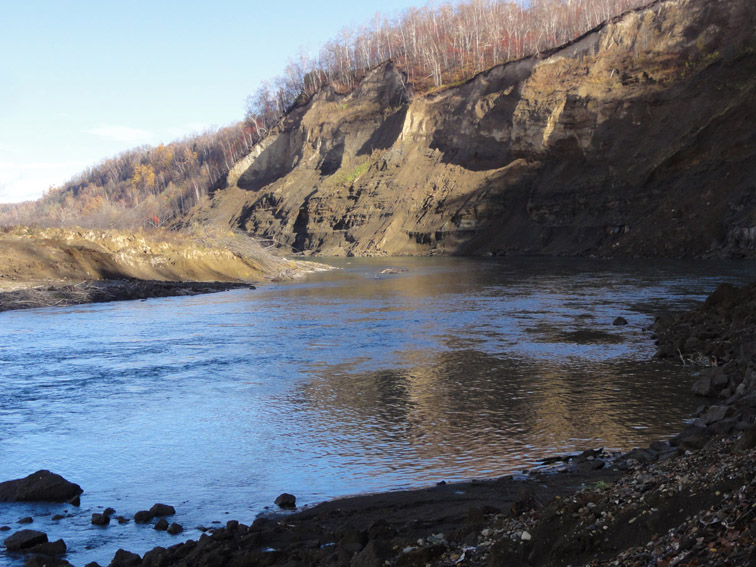 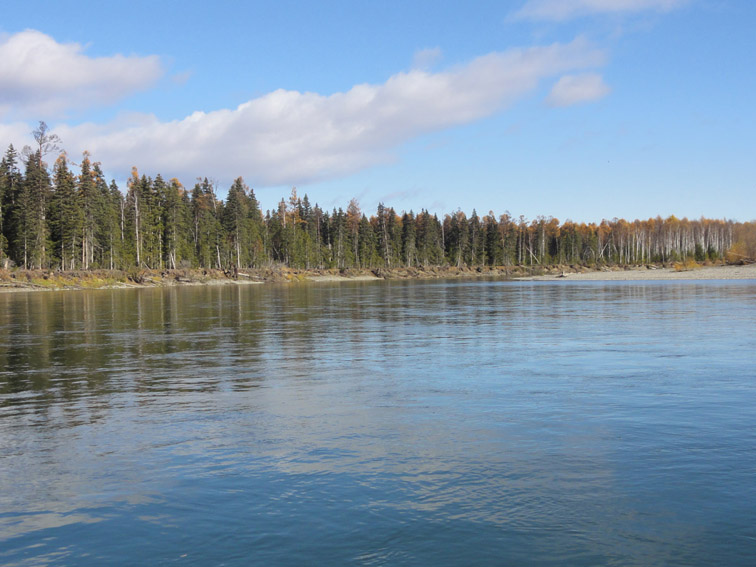 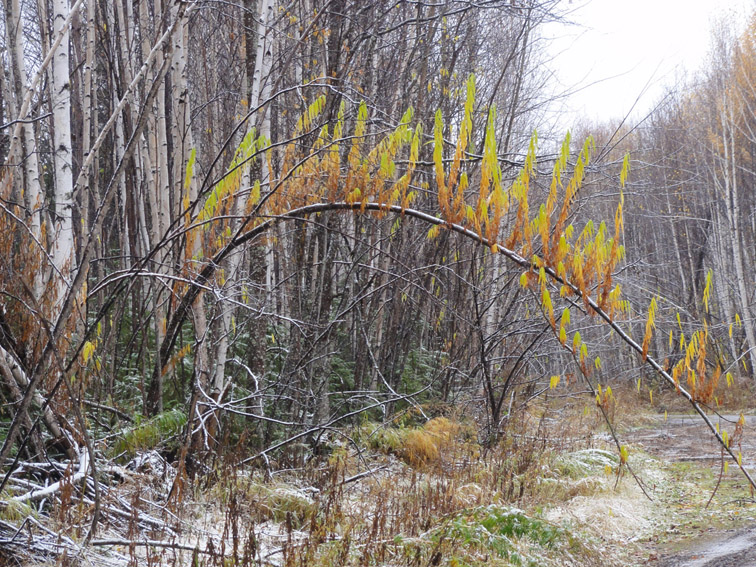