I was working in Sakhalin Island, and was lucky to have a 5 day window between two expeditions. I was in the central part of the island, and the next trip was planned in the north, from the town of Nogliki. I have got an idea to spend these days at the Tym River — the Nogliki is exactly in the mouth of this big river. So, I could reach the town not by train or car but by floating the river.

The next morning I was at the Alba railway station near the village with the strange name Argi-Pagi. The distance to the river was about 500 meters. The weather was rather normal for the Sakhalin summer — rainy and windy. 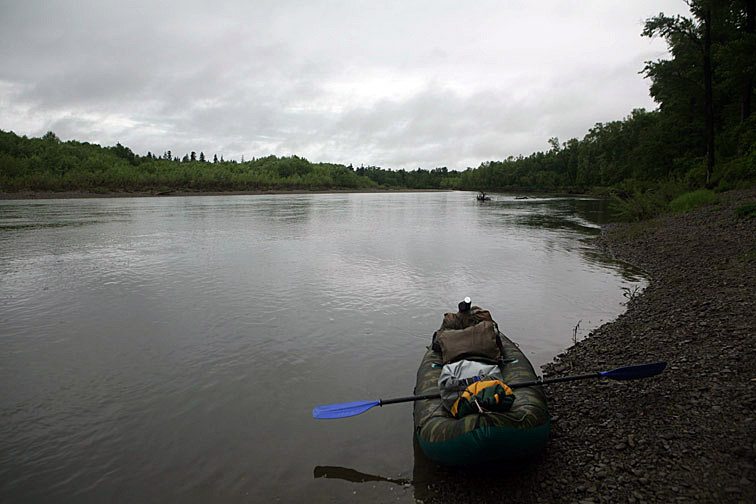 Since 2008 I am using an inflatable kayak instead of rubber raft. The kayak is moving faster, so you have much more time for the fishing.

Tym is the second largest river in the Sakhalin after Poronai; it is 330 km long. Tym is flowing in the widest part of the island; it moves west, north, and then turns north-east and joins the Sea Of Okhotsk. The straight distance between the Argi-Pagi and Nogliki is 60 km, but the twisting river makes the float 2,5 times longer. Tym is a salmon river; here spawn Pacific salmon: pink, chum, coho, and cherry. Regardless to all efforts of the local caviar poachers salmon are still rather numerous. The only thing in which the poachers had succeeded is the almost total devastation of the local Sakhalin taimen stock. Taimen used to be plentiful and big in the Tym, but now it is a rare fish here. 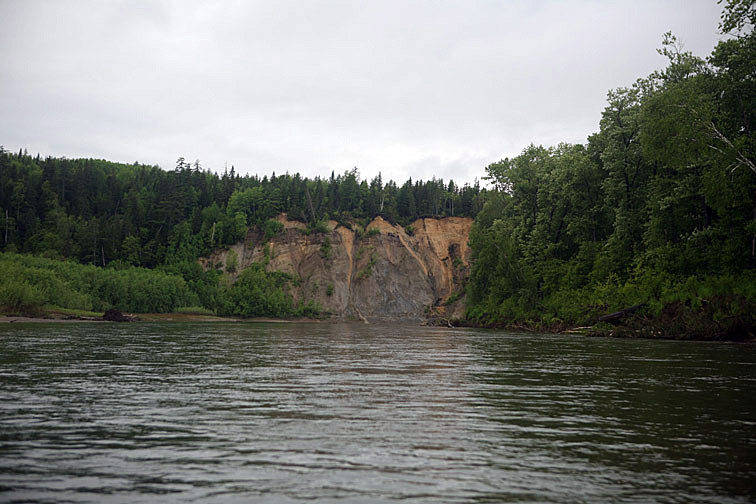 Tym is a big river with wide deep pools. In some places you will see the steep yellow banks out of soft sandstone.

In the middle reaches the Tym River is  meters wide; it has pebble bottom and rather strong current. Deep sandy pools are separated with swift riffles. The wide valley is grown with willow and poplar, and in some places with dark spuce forest. As always at the plain rivers, the straight stretches are of not much interest to the fisherman; at the turns and forks there are much more promising structures. 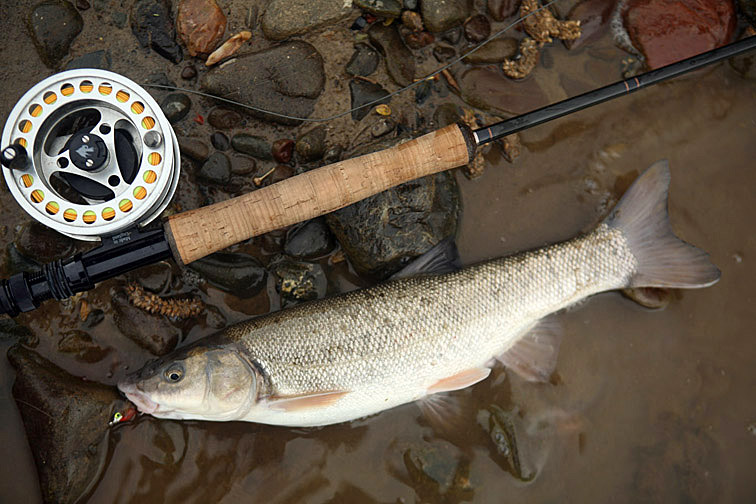 Eso redfin was biting small streamers at the riffles, but I was not able to catch the species with a dry fly — to the opposite of its relative, large-scale redfin. 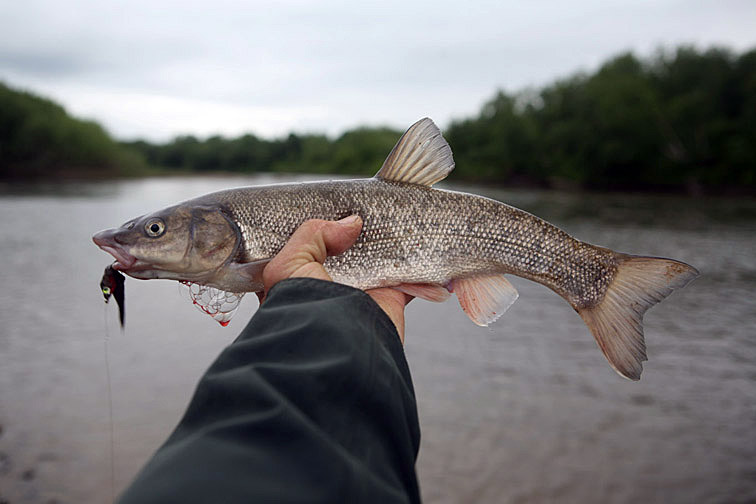 Eso redfin could grow up to several kilograms. It is easy to distinguish the eso from the other redfin species by its sharp «nose» and by the total absence of the orange strips. 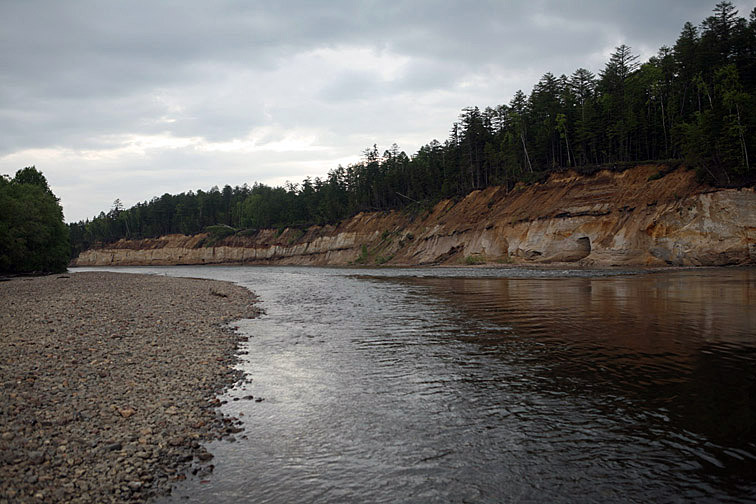 Near the high crumbling banks in the Tym there are always riffles. Below these riffles there normally was a school of redfin. During the salmon run these riffles should be a good place for catching salmon as well. 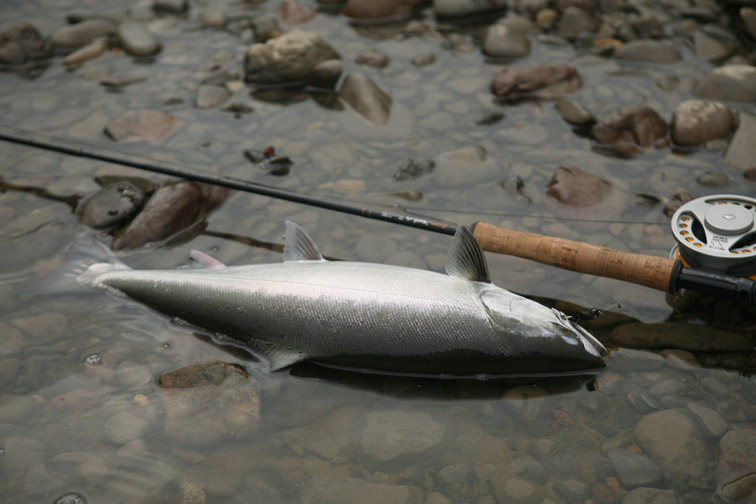 Beginning of July at the Tym was not the best time for salmon fishing: it was too late for the cherry and too early for other salmon. I only had managed to catch one 50 cm long cherry salmon. 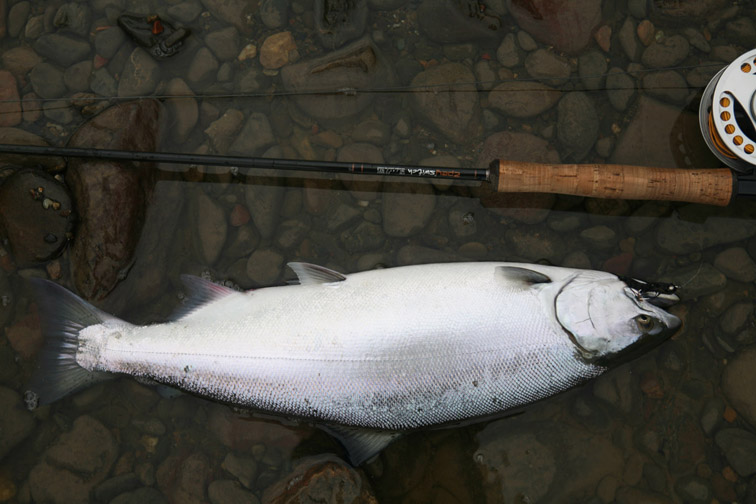 For the Sakhalin Island where the cherry salmon is normally small this is a big fish. 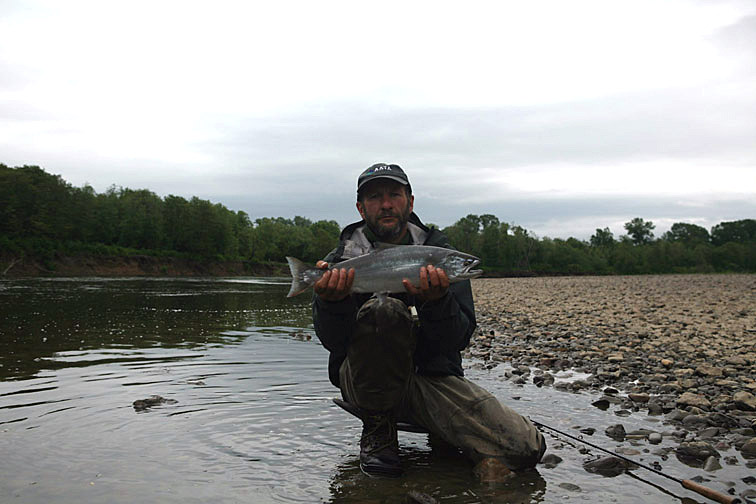 Cherry salmon was caught in the riffle, with a dark Wooly Bugger on #2 hook.

The schedule of my trip was rather tight; I was not able to cover thoroughly numerous holes and pools of this rather slow river. Besides that, there is an old rule: fish in the areas which are rare in the given stream. I had decided to concentrate at the riffles where I was expecting more action. I also wanted to catch pike, and started to look for the bays and sloughs. 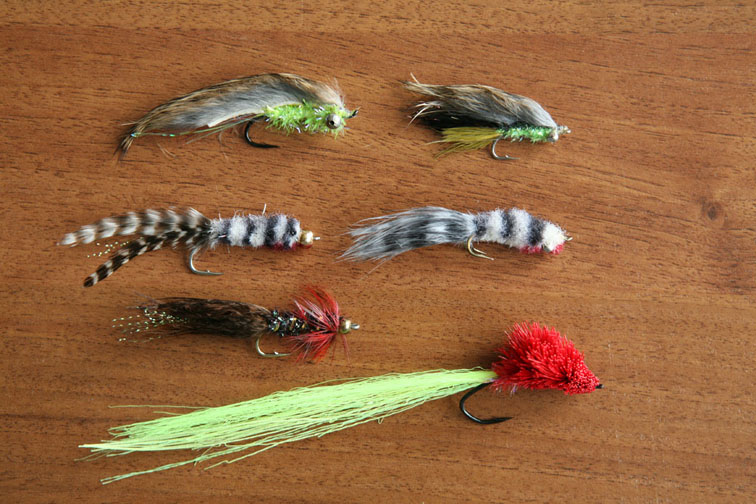 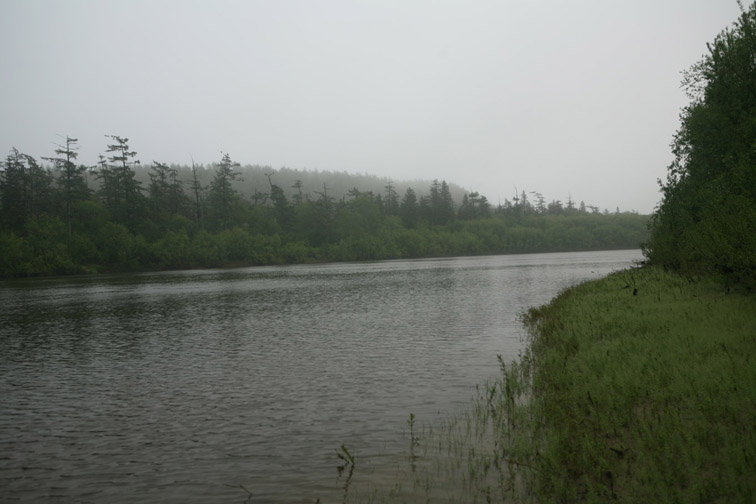 In the second half of my float, below the Nysh village, the river became slow and quiet, and even the sand bar were rare in this stretch. The stream was looking like a long pool with low, steep banks covered with thick willow growth. Here it was even hard to find a place for the camp. The lower stretch 10 kilometers above Nogliki is a tidal area; here you feel how the sea is «breathing».

I love the feeling of the first casts into the new water when you have no idea who can be tempted by the fly. Now I know that below the riffles there were mostly eso redfin. Pacific redfins (genus Tribolodon) are the only true anadromous carps (Cyprinidae). 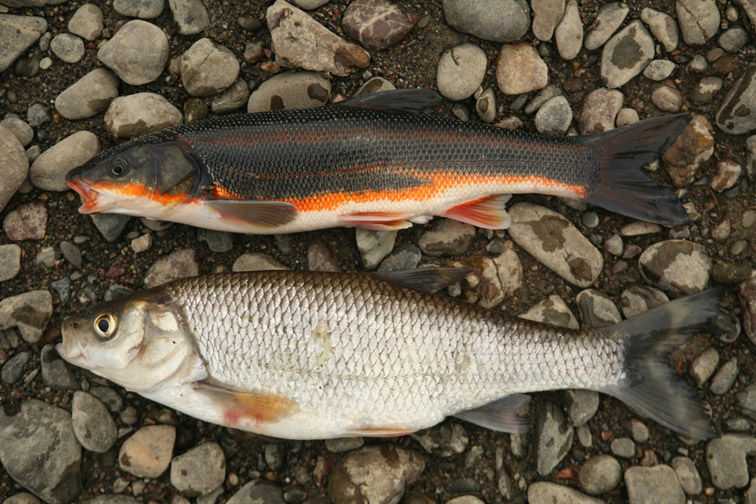 In the redfin genus there are three relative species; in the Tym I was catching two of them. The most common was the eso redfin, a thick olive-grey fish with a thick tail and sharp snout. This is a predator which is not eating the insects at the surface. The large-scale redfin has more slender body and short, rounded snout. This species is paying its attention also to the river surface and eats lots of insects. In the areas with slow current I was also catching Amur ide. In the Amur River it is rarely big, but in the Tym I was catching large 500 gram specimens, and the locals are telling on the 1 kg ides caught through the ice. 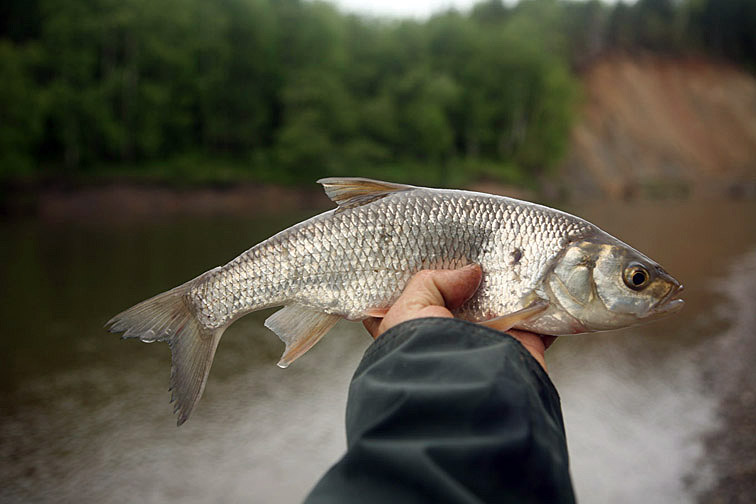 In the Sakhalin Island the Amur ide is often rather big for this species.

My pike fishing did not go according the plans. Soon I had found out that in the Tym in low water there are not many bays, and the huge lake-like old channels are cut from the river completely by the sand deposits. So, it was esy to understand that the pike had to be mostly in the main channel of the river, but I could not imagine that it will be found mostly in the wrong habitats. At one riffle I had a streamer bitten off by something, and the next cast had brought me a pike... 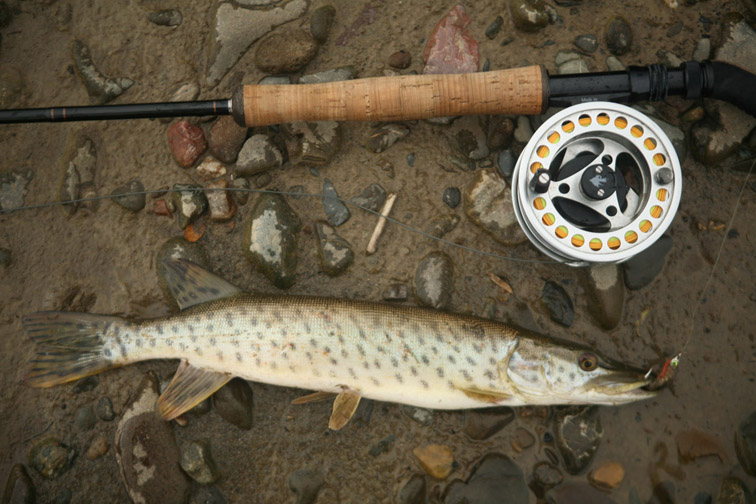 This pike had bitten a small streamer on a thin tippet.

The pikes were found everywhere in the river and not only in the typical pike habitats. On the third day of the float the serious cyclone had covered the island, and pikes had stopped the biting completely. It was bad luck — the Tym River is famous by its huge pikes. Well, I will come here one more time and will aim namely at the pikes... 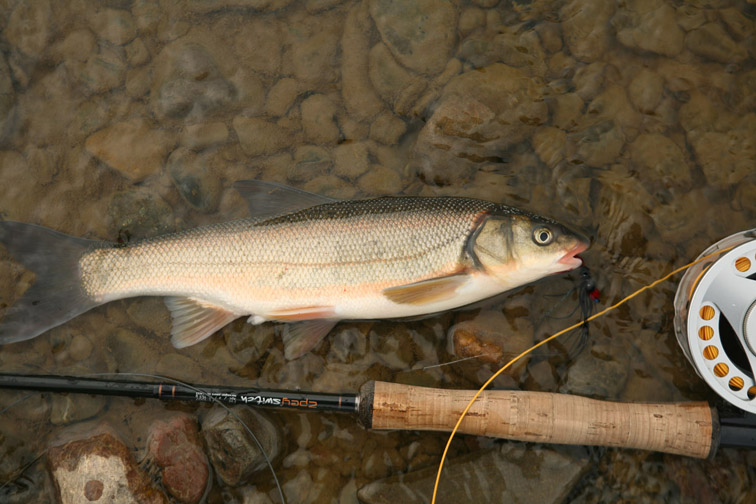 The large-scale redfin was biting both the streamers and dry flies at the surface.

The same foul weather had brought some unexpected guests from the river depths. At the noon of the third day I had to row against the eastern wind carrying the rain drops. In some curves of the river the water was almost smooth; here I started to see the hatching yellowish mayflies. There were more and more of them, and soon there were several insects on each square meter of the stream. The fish had started to feed. 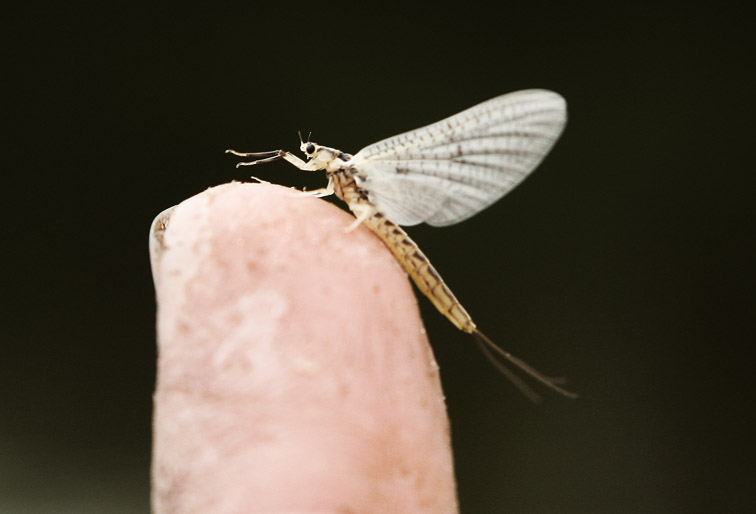 The foul weather had triggered the hatch of big, yellowish mayfly

The fish was splashing everywhere, but there were more rises in the seams between two currents, at the openings of the bays and in other places where the floating debris and the insects were concentrating. 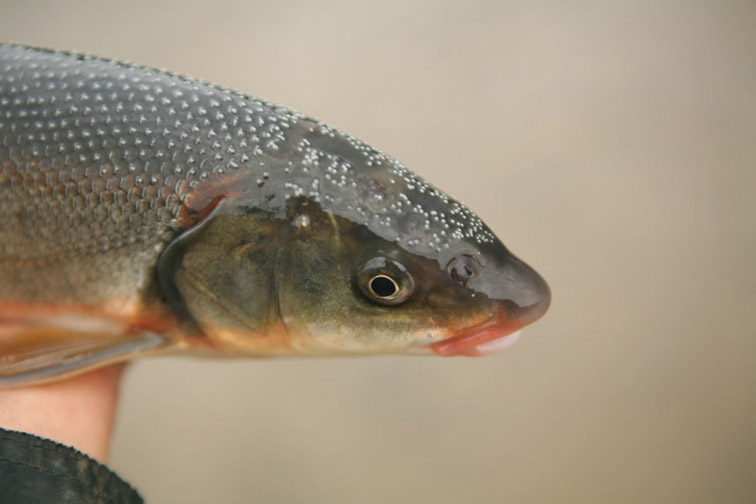 The redfin ready to spawn is covered by the pearl rash*

The hatching mayflies were big — about size 10. In that trip I had found out that it is much more convenient to fish with a dry fly from the moving boat comparing with the more common casting from the bank or by wading. If you are in a boat moving with the speed of the current there is no need to thing on the mending or drag. Make a cast, place your fly among the living insects sitting on the water, and wait. 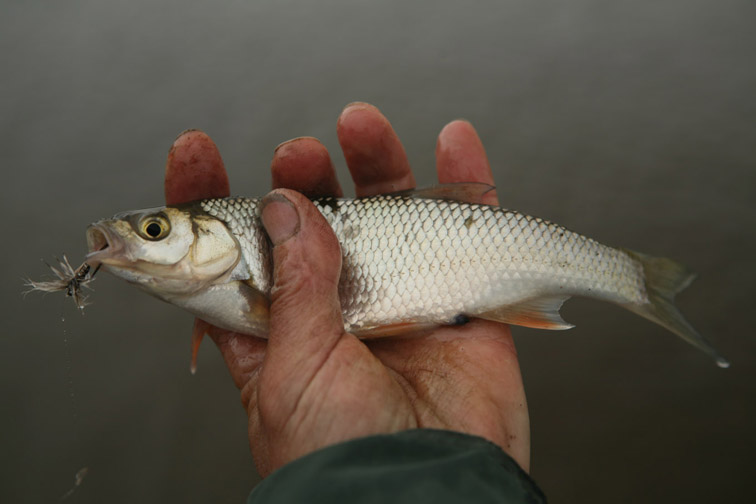 A little ide is caught with the mayfly imitation

The best is to look for the feeding line of the fish. In some places you see that a fish is picking one mayfly after another, not moving far left or right. Put the fly right at this belt conveyor, and wait for the bite. Most of the feeders were good size large-scale redfins; some ide were feeding closer to the banks, in the bays and holes. 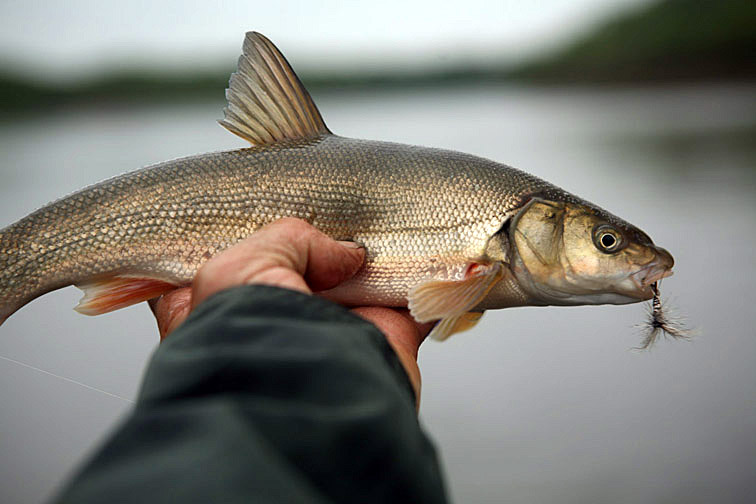 Regardless to its half-inferior mouth the large-scale redfin is coming to the surface and eagerly feeding by the hatching mayflies. 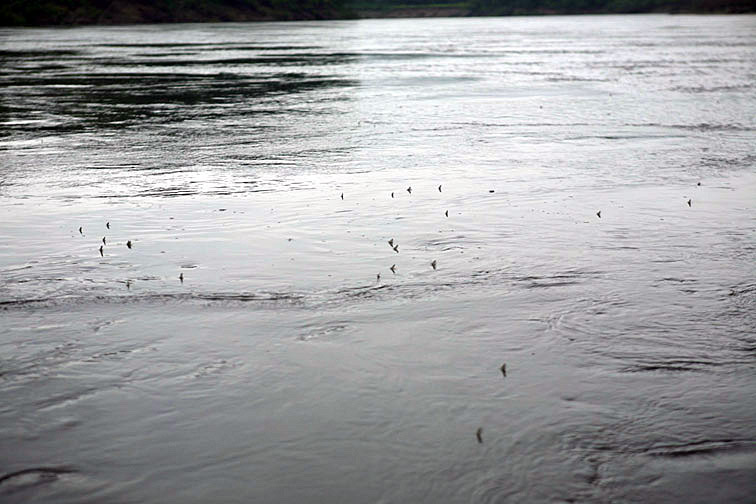 That afternoon the mayflies were hatching regardless to the cold and windy weather.

It is often happening that in the fishing one gets not what is expected; for me it is the biggest intrigue of the trips to the new areas. I was coming to the Sakhalin in search for the salmon and taimen, and got a very pleasant dry fly fishing as a bonus. 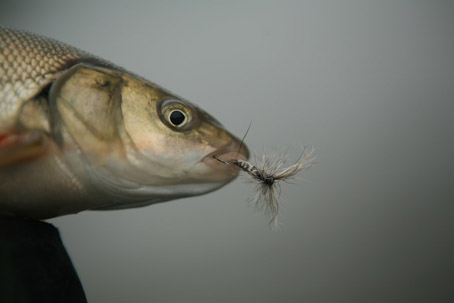 Catching redfin with a dry fly is much easier when casting from a moving boat.