The Anuy is a large right tributary of the Lower Amur; the river is 393 km long. In the upper and middle reaches this is a swift mountainous river with a narrow valley. Below the mouth of the large right tributary, the Gobilli, the Anyui valley widens and the current speed slows down. The river begins to divide into channels, many of which are completely blocked by log jams. On this stretch the Anyuiski National Park is located.

The fish in the upper and middle reaches of the Anyui are typical for the mountain rivers of the Amur basin. These are yellow-spotted and Lower Amur grayling, sharpnose and bluntnose lenok, as well as Siberian taimen. Due to the roads construction, in recent decades Anyui has become increasingly accessible to the anglers. Because of this the fish living here is under the ever-increasing fishing pressure. As usually in such cases, the Siberian taimen is becoming less and less numerous. Earlier in the Anyui the fish weighing more than 25-30 kilograms were often caught. Even the 50+ kg giants were pressent in the river! Now most of the taimen in catches are young ones - 40-70 centimeters long. The numbers of lenok also have noticeably decreased, although there are still quite a lot of these fish in the river. The average weight of lenok in catches has reduced somewhere in half. Lenok has also become noticeably more careful; catching a fish weighing over one and a half kilograms is not as easy as before. Two grayling species are still numerous in the Anyui. In the middle reaches of the river a smaller species prevails - the Lower Amur grayling. The larger form, the yellowspotted grayling, is considered to be a close relative (subspecies) of the Upper Amur grayling. In the lower reaches of the Amur, it occupies a different ecological niche comparing to the Lower Amur brayling - in summer it lives mainly near the sources of the swift rivers, in tributaries with a large gradient. My friend and I have traveled up the Anyui River from the mouth of the Gobilli River to the mouth of the Zaur River. It was an interesting trip on a difficult and very beautiful river. 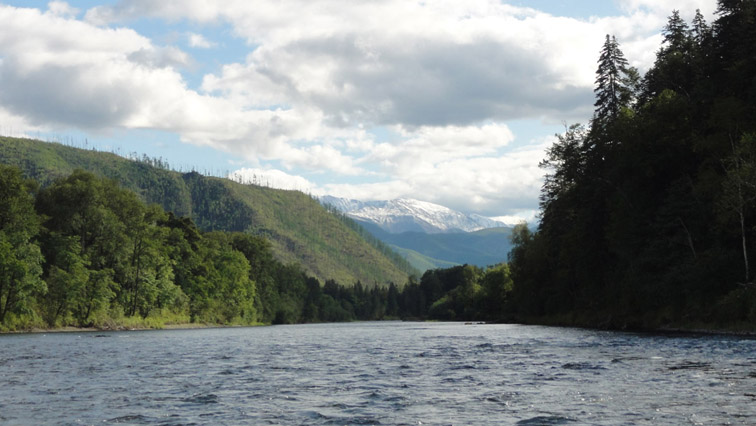 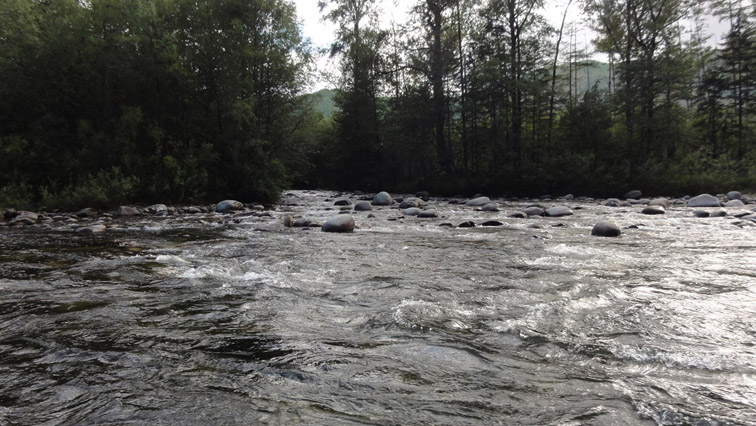 A riffle with many boulders in low water 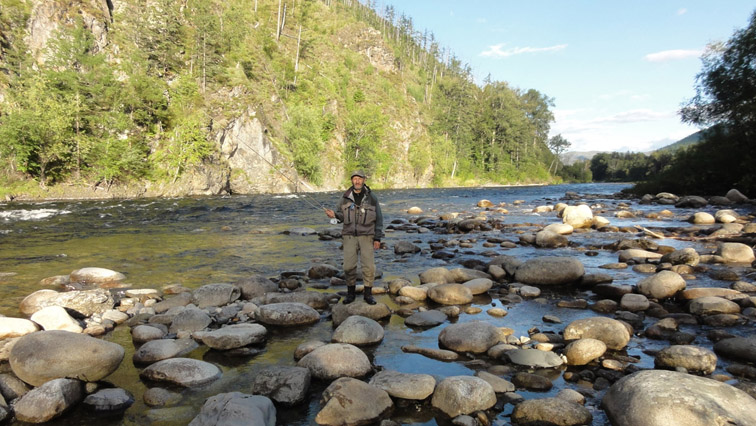 At the mouth a tributary - the Bogbasu River 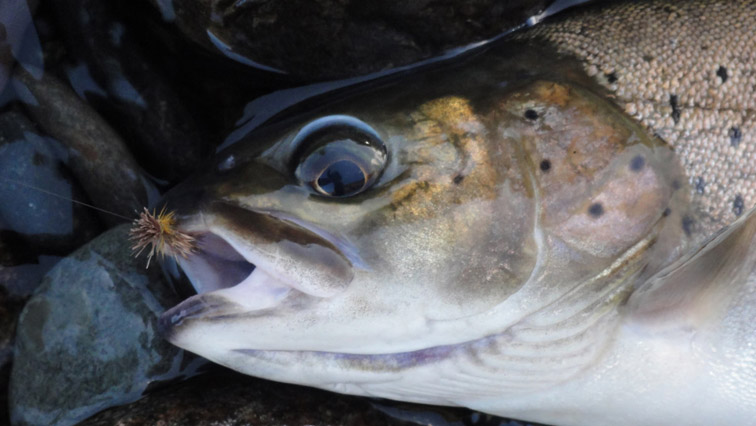 A bluntnose lenok caught with a small dry fly 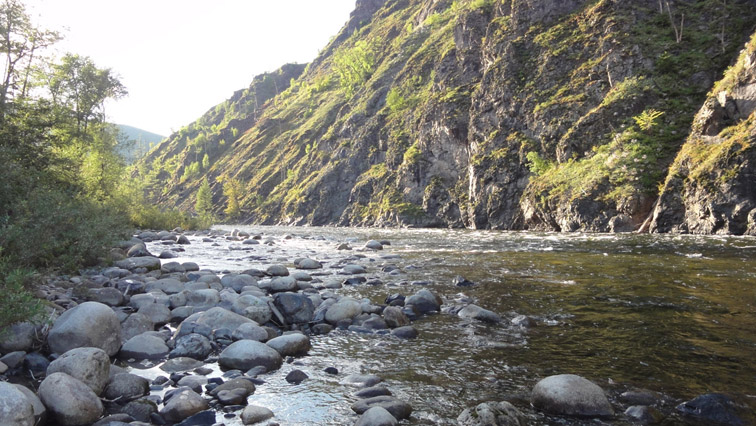 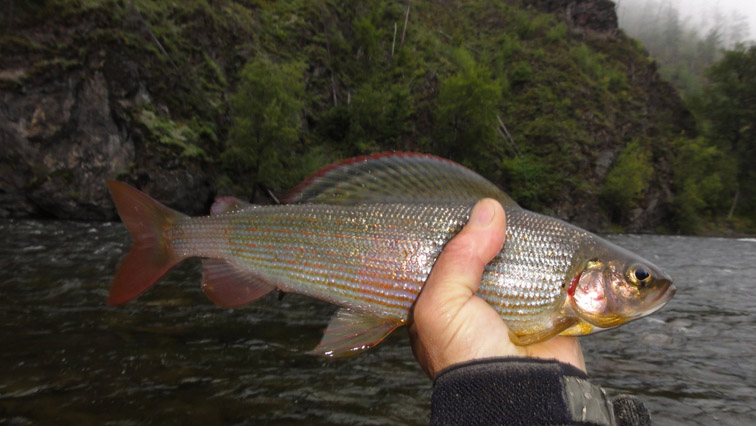 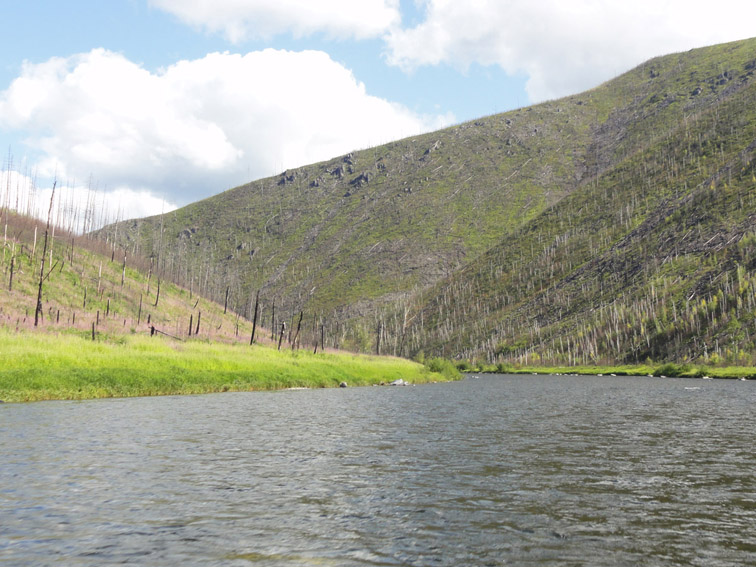 Here there was a huge forest fire 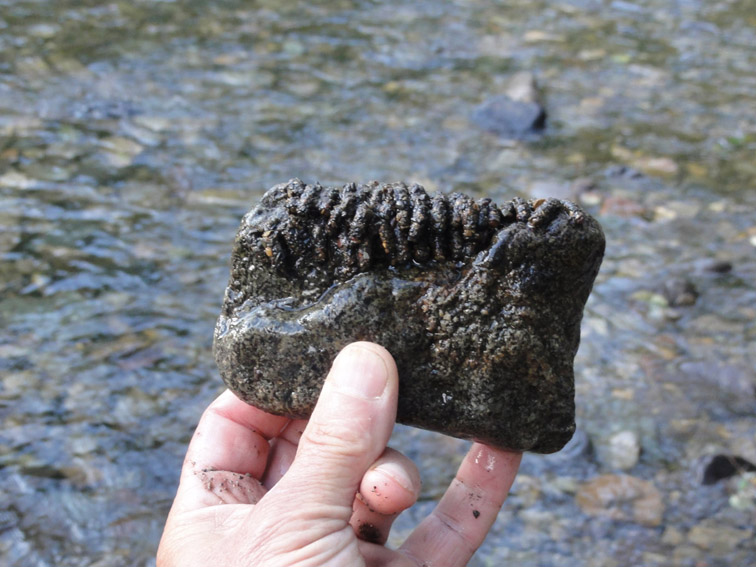 Numerous caddisfly larvae on a rock 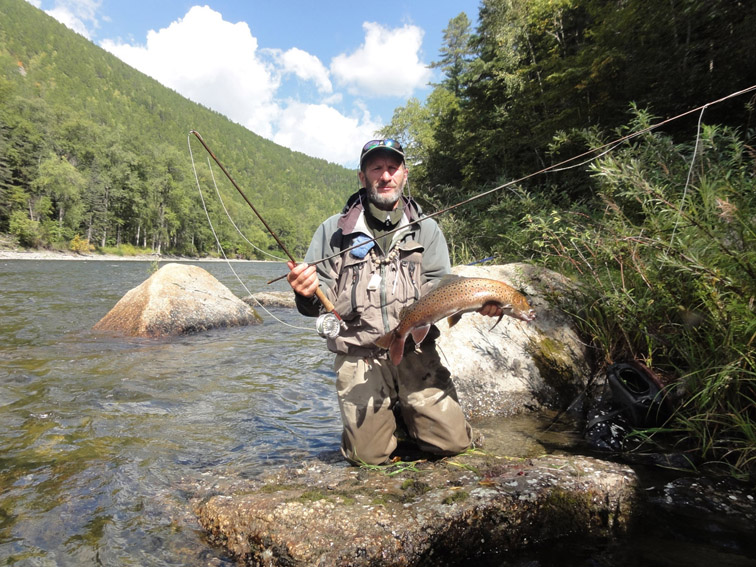 After this bite my old grayling rod needs replacement 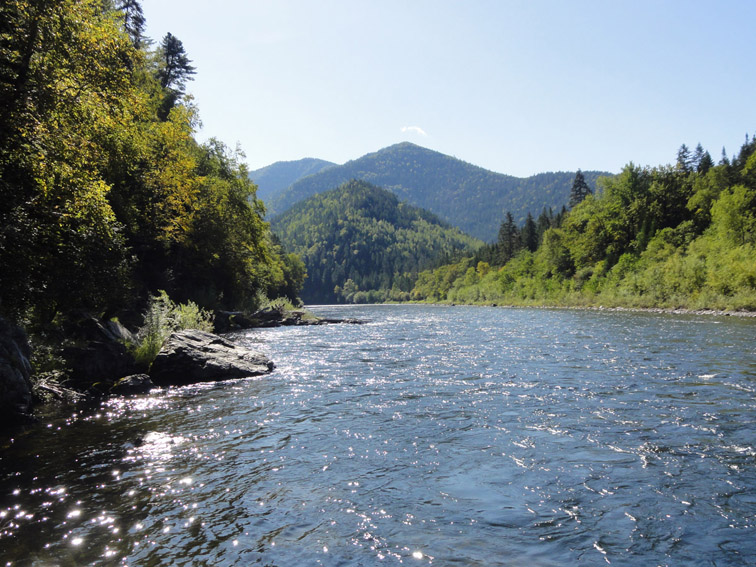 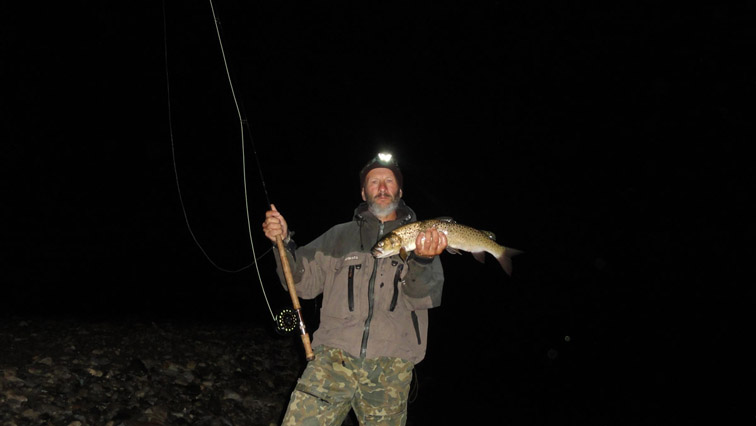 A good lenok is the easiest to catch at night, with a mouse imitation. The flyrod gives better chances - the fish bites are very careful. Often you feel only light touches, and the fish is not hooked. In this case, I make a few more presentations without changing the line length. There are lots of chances that the moody fish will be hooked. 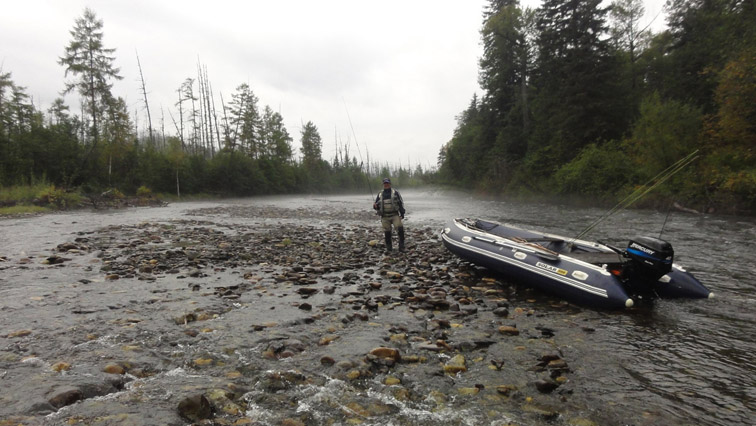 We have decided not to go further upstream - the river is becoming narrow and very shallow. 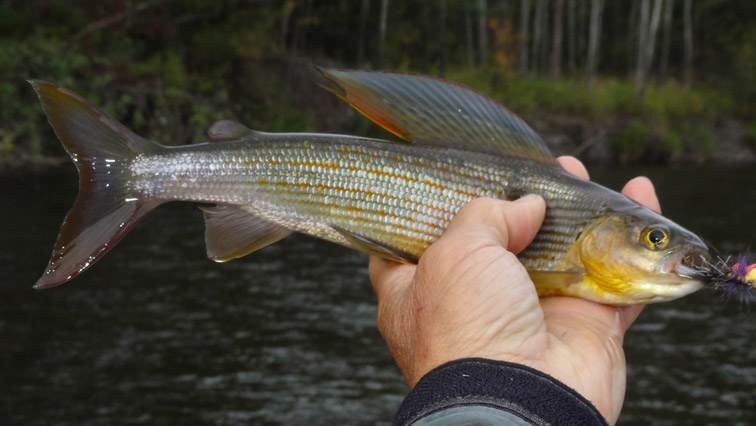 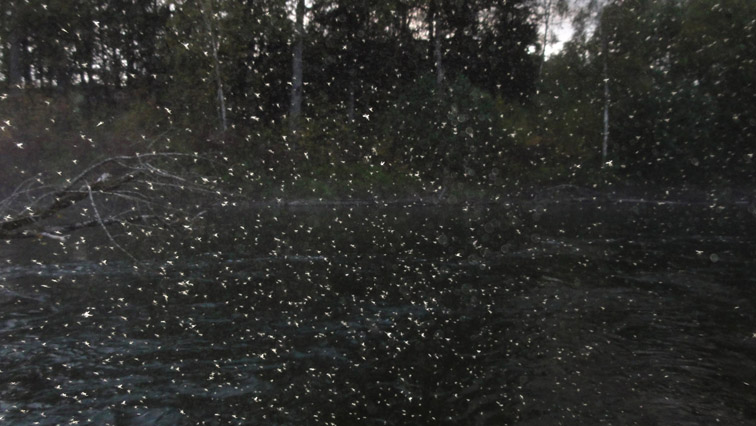 Evening, a mass hatch of the chironomids 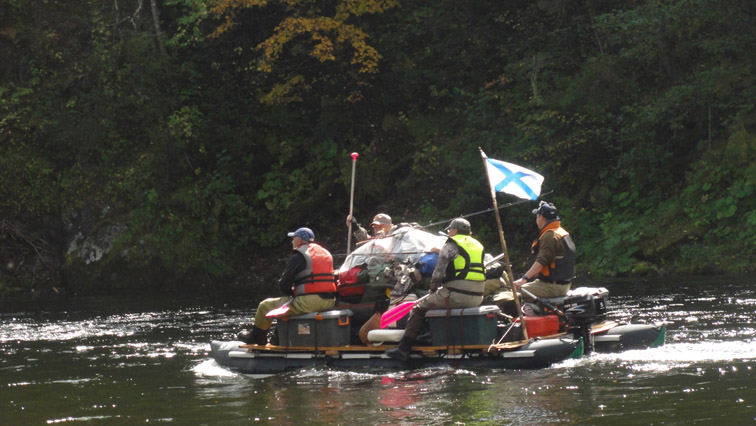 Tourists floating the Anyui with a raft 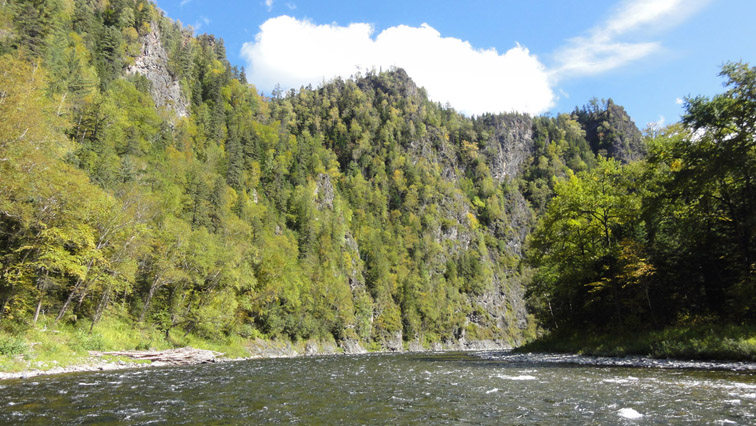 We are going downstream 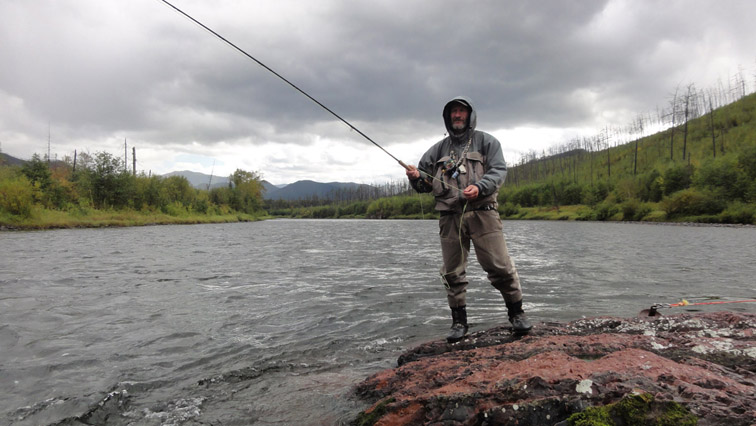