The tail is tied to the hook after the blade. It could be made out of different fibrous materials such as synthetics, wool, soft feathers, Flashabou, etc. The length of the tail could be about a half of the hook shank length, as long as the hook, and sometimes twice longer than the hook. The tail of the fish imitations normally consists of three layers: dark on top, flashy in the middle, and white (yellow) at the belly part.

After installing the tail the hook shank is wrapped by different materials which form the fly body. These could be foil, Flashabou, synthetic or natural threads, dubbing, or chenille. Instead of this on some flies I just cover the hook shank and the narrow part of the blade tied to it with waterproof paint, bright or light. 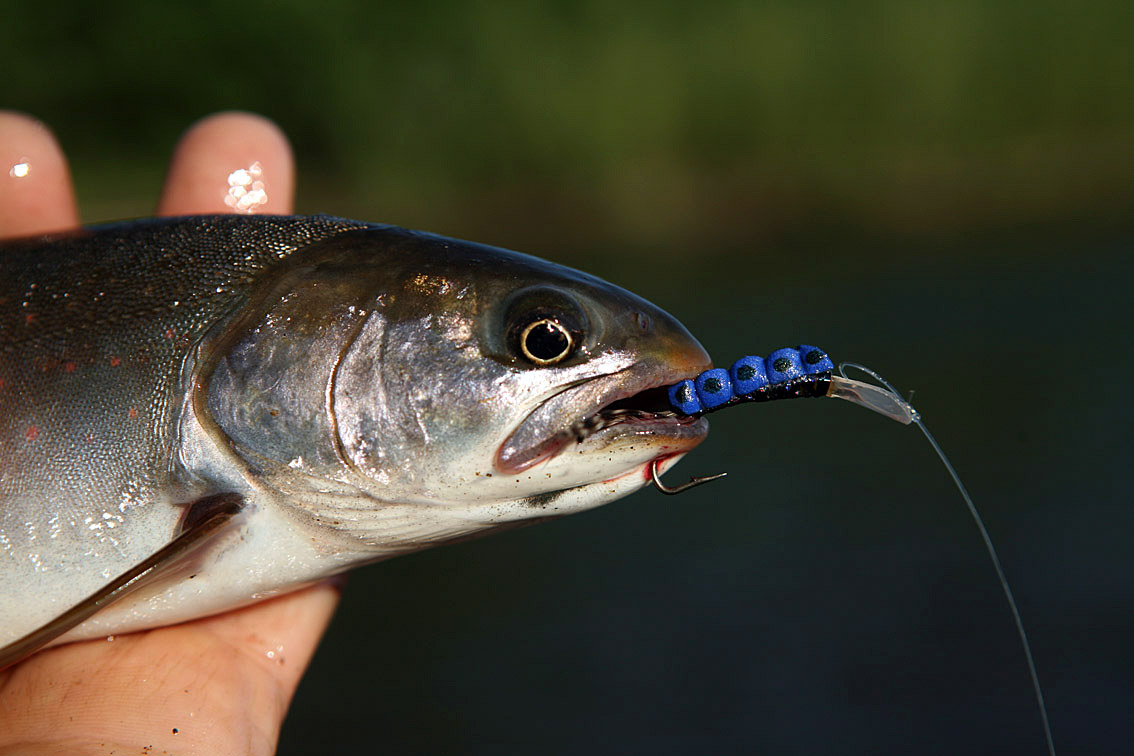 Anadromous charr fresh from the sea is normally not too interested in the regular flies, but the wobbler-fly it is always grabbing with mucho gusto

The floating foam back and the blade pulling down (and the added weight of the hook bend) form a force couple, which stabilize the wobbler-fly on the retrieve. So, the lures with more «contrast» between their back and belly are much more stable even on strong current. The fly back is made out of a strip of a buoyant material, most often — synthetic foam. It is easy to obtain in different thicknesses and colors. The most «active» flies are vibrating even on slow current (about 30cm/sec) or on slow retrieve. The «lazy» flies are suitable to be used only in rather strong current. Wobbler-flies should be tied in a loop. You could use either the Rappala knot (see the image below), or the Duncan Loop. 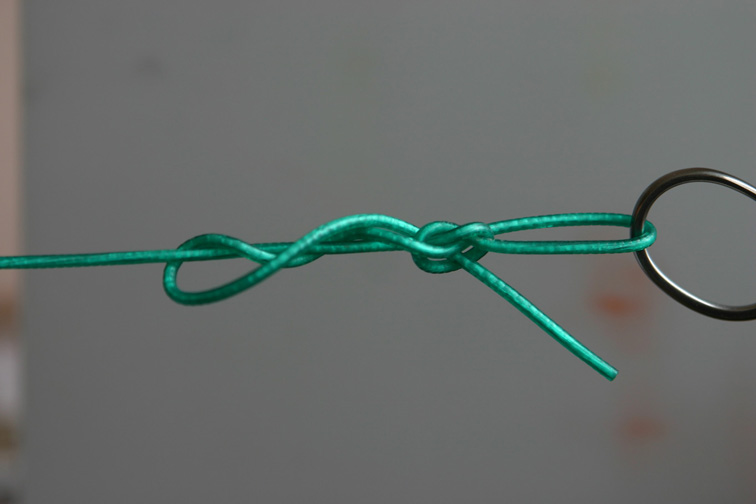 The Rappala knot is forming a permanent open loop One more way to connect the big size wobbler-fly to the tippet is the use of a clip use by spin-fishermen. I am using these clips only with steel tippets which are a must when fishing for toothy fish species. 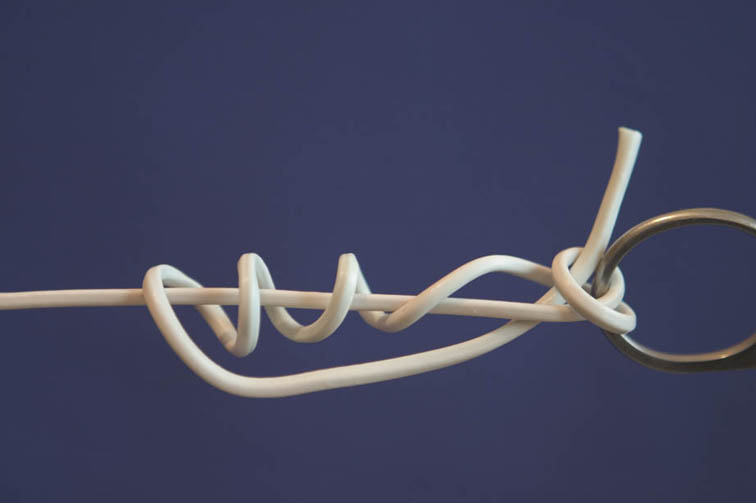 To the snap or a swivel of a steel tippet the line is connected with a Double Clinch knot. The biggest wobbler-flies (on the hooks #1/0 and bigger) work well even on 0,4 mm tippet; if necessary they could easily carry a steel tippet with a swivel and clip. With the flies on the #1 and #2 hooks I use the tippet up to 0,35 mm, and the ones of the hooks need the mono. The smallest versions of these flies on #12 hooks I use with the line.

The main types of the wobbler flies 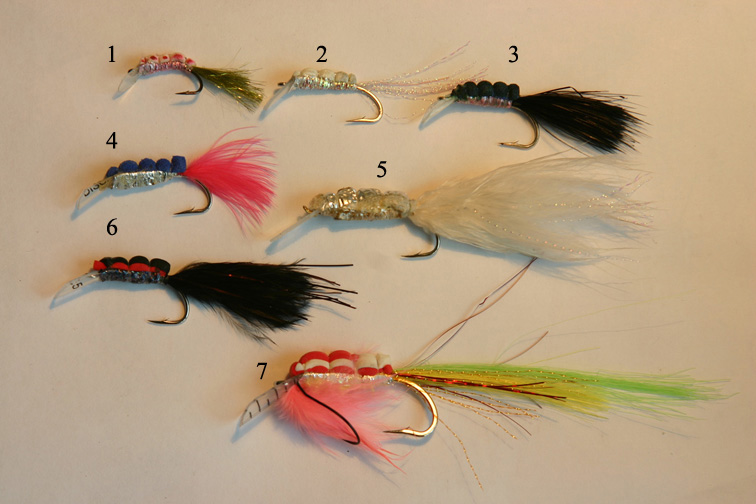 The flies which were working well on some fish species: 1, 2 — Amur River carps; 2, 3 — brown trout; 4, 6 — pink salmon; 5 — Amur catfish, Mandarin bass; 5, 6 — coastal fish of the Sea of Okhotsk; 7 — Amur pike. Wobbler-flies are more difficult to cast comparing with the regular ones. Their blade catches the water surface which complicates the initial lifting of the tackle. Shorten the line and then lift it up to the fly off the water — the fly will be airborne. The general approach to the wobbler-flies presentation is the same as with the regular streamers. In the swift streams I use the current and let the fly swing with no retrieve. The fly speed could be changed by directing the cast and mending. The fly vibrations are easily felt with a hand holding the line. If there are no vibrations, you know that the fly hook had caught the tippet, or caught some debris. In slow water I make the cast and retrieve the line into the boat or stripping basket; the average retrieve speed is about meters per second. The stripping could be done with jerks or without them — with both hands. There are many methods to present the plugs invented by the spin-fishermen. Some of them you could also use with the wobbler-flies. So, you could let a fly float downstream under the overhanging branches, and then retrieve the line: the fly will be passing the fish lies. 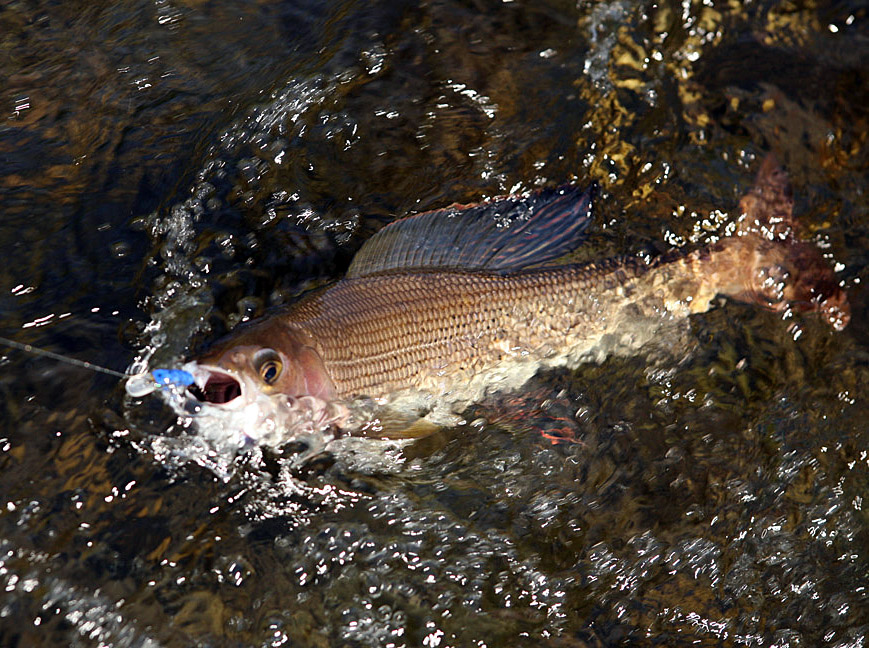 Kamchatka grayling from the Levaya River Wobbler-flies work well for brown trout in mountainous rivers. There are the areas where the only point where the fisherman could stand is high above the water, on a steep bank or a huge boulder. Any streamer presented from such a point will drag lifelessly on the water surface. On the contrary, a wobbler-fly is catching the water with the blade and continues to wiggle under the surface. 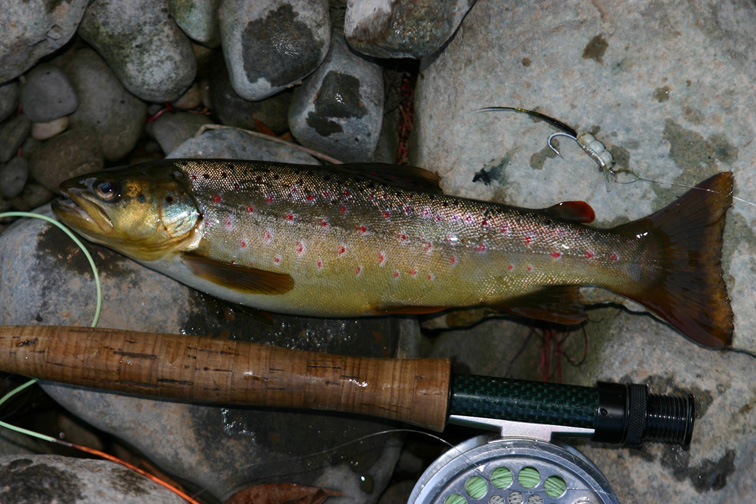 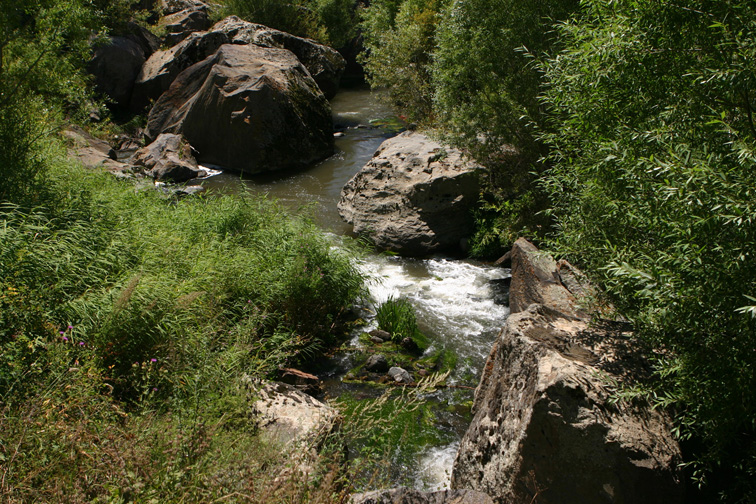 In such place a fisherman often has to fish from the top of one of the boulders, standing high above the river

Wobbler-flies are working well on Pacific salmon. I was even able to catch some sockeye salmon (#8 black or dark blue flies). Pink salmon were biting pink or red wobbler flies, and coho — pink or purple flies. With the same flies I was catching lots of rainbow trout and predatory Kamchatka grayling. The wobbler-flies are attracting different predators of the Amur River; the murky water makes these flies especially efficient. Most often I was using them with a 15’ sink tip or with a sinking line. In the Sea of Okhotsk and the Bering sea the wobbler-flies were catching different marine fish such as different species of flounder, greenlings, rock-fish, sculpin, etc. 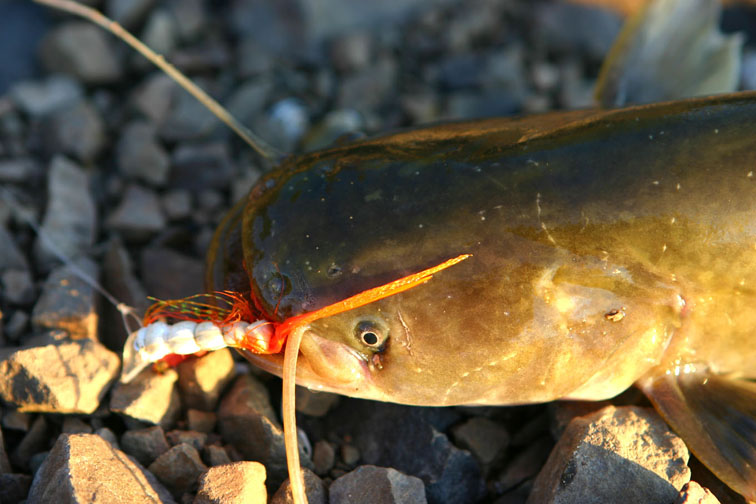 Amur catfish is often chasing its prey on the shallows near the sandy banks. 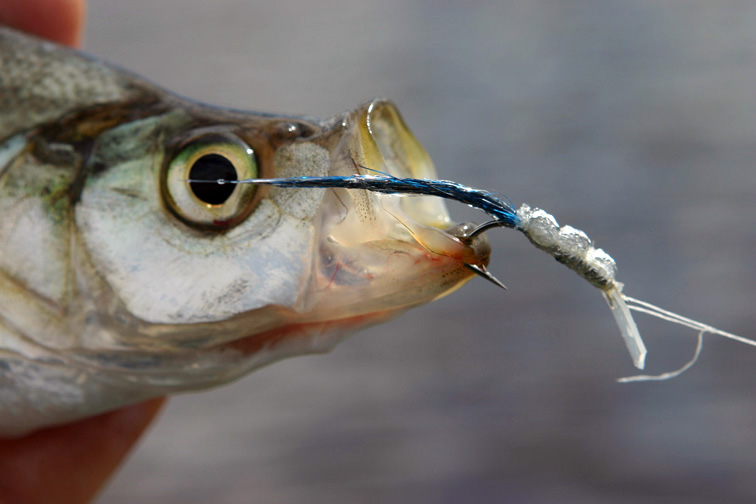 Skygazer from the Amur River Conclusion If you do not want to limit your experience to river fishing for salmon and trout, it is necessary to widen the selection of your flies and presentation methods. The wobbler-flies are without doubt a serious deviation from the classic fly-fishing. On the other hand, they are a good solution of hard cases like deep and murky water populated with non-salmonid fish.